Massive trees & a canvas roof – One of our earliest woolsheds.

The woolshed at Jondaryan on Queensland’s Darling Downs is one of the oldest and largest shearing sheds in the world. Heritage listed, Jondaryan Station dates to 1840, when English born Charles Coxen sent his nephew off on an expedition to find suitable pastoral land for his rural aspirations. The lad had a good eye for land. He selected acreage located approximately 45km west of Toowoomba, recognising how suited it was to wool production. The station was originally called ‘Gundarnian’, which meant ‘Fire Cloud’ or ‘Place of the Fire Cloud’ in the local Jarowair dialect, before being altered to Jondaryan to fit the English-speaking newcomers. In its first 17 years, the station endured a tempestuous era. It changed hands seven times and little development was carried out on it.
For Charles Coxen those early pioneering days were hard. After many confrontations with local Aboriginals he sold the property in 1845 to businessmen James Andrew and Robert Campbell. They built the first woolshed on the property two years later, however it was burnt down in 1849 when disgruntled workers fought against the poor working conditions and unfair wages.

The current woolshed wasn’t built until 1859, when it was once again under new management. William Kent and Edward Weinholt set to work building a pastoral showplace. 5,000 sheets of a recently developed product, corrugated galvanised iron was used to roof the huge shed that was previously covered with canvas. The shed was constructed out of hand-hewn Ironbark timber with whole trees being used to support the structure and buried eight feet into the ground.  Completed in 1861, shearing began in the woolshed almost immediately. With 52 shearing stands, the Jondaryan Woolshed laid claim to being the largest shearing shed in the Darling Downs for the next 30 years. In 1890 it was updated, and the shed changed over to machine shears, with some stands remaining original. Later, a shearers complex, a butcher shop, a station store and a hide and tallow house were also built on the station, catering for the some 100 men who worked on the property.

At its height the holding comprised 300,000 acres but in 1894 Jondaryan Station was turned over to a family limited company, and the property was broken up into smaller parcels of land. In the new century farming was to gain favour over sheep. The location of the property – the Bunya Mountains to the North, Great Dividing Range to the East and Granite Belt to the South, placed it in what would become one of the most productive pastoral areas in Queensland. The black soil plains soon saw the advent of large-scale cropping and an ever-diminishing Jondaryan holding as parcels of land were put under the hammer. While the woolshed remained functioning throughout this time, the property’s glory days were long gone. The local Jondaryan Shire Council took over the woolshed in 2002, and it is now an interesting museum and popular event centre, with shearing demonstrations and camping grounds for visitors. 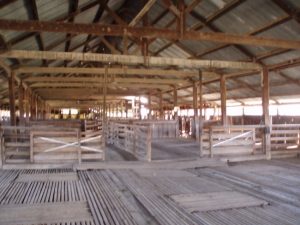