Yesterday I had my first foray into live television cooking, via Skype. It was all lights, camera, action with liberal assistance from my mother, Marita who along with the savvy technicians and producers at Studio Ten helped get things set up both at home and virtually. What an experience. I was asked to share rural cooking tips and a generational recipe. My basic English trifle or Tipsy cake – the strength of which depends on the alcohol added, as it was called in the 1800s comes from my maternal great-grandmother who found herself suddenly transported from the leafy church bell city of Adelaide to Coolgardie in Western Australia when gold was discovered there in the early 1890s. She followed her husband who was sent out to establish a bank in the town, a rather important necessity as by the late 1890s Coolgardie had grown to be the third largest town in the colony of WA with over 600 mining companies represented there. Not that my great grandmother Clarissa had it too tough finding herself living in an area roughly 500 kilometres east of Perth. She had a cook, housekeeper and other domestics to ensure the smooth running of the household and because of this it’s always been assumed that the recipe for the Tipsy Cake originally belonged to the cook, later becoming a family favourite. The trifle or Tipsy cake was thought to have been developed in the 1500s to make use of stale cake with the word trifle stemming from the French trufle, meaning something whimsical. The basic early additives were cake and pureed fruit whipped with cream. Of course these days trifles can include aeroplane jelly, prepackaged jam rolls and too much custard. Believe me, the old recipes are by far the best. 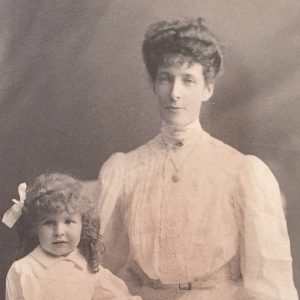 So here it is:

Method: Slice peeled and cored apples place in pot on low heat with remaining ingredients cook slowly until soft. Place to one side to cool.

Method: In a saucepan over low heat stir together the milk and half the cream. Beat the eggs well and add to mixture along with a little sugar. Let the mixture thicken over heat. Do not boil. Place to one side to cool.

Pour mixture into prepared tin and bake 175 Celsius for 20 minutes.

On a cake stand place the sponge at the bottom. Sprinkle liberally with sherry. Layer apples on top and drizzle with custard. Top with whipped cream & grated chocolate (the chocolate was added to the recipe in the 1920s). 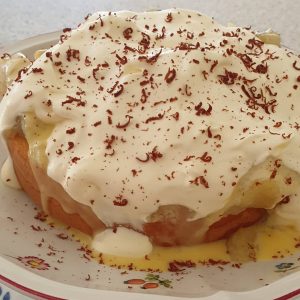