In a normal season many farmers would be close to finishing their winter crop plantings. Not this year. While there are some who received the benefit of good rain or were prepared to take a punt on limited moisture profiles, there are many who would be staring at yet another year of dry, unplanted cultivations. In an average season across Australia we produce some 24 million tonnes of wheat per year of which 75-80% is destined for export markets mainly the Middle East and Asia. Grain growing is big business in Australia, if the rains come.

However grain growing in Australia had a slow start. If we rewind to the April of 1787, Australia in its infancy as a British colony had a long way to go before the growing of cereal crops such as wheat became viable. Captain Arthur Phillip was directed, among other things, to proceed as soon as possible on arrival in the new colony to the cultivation of the soil with the purpose of securing “grain and provisions”. This directive was based on Captain James Cook’s reports regarding Australia’s potential for productivity when he arrived back in England. 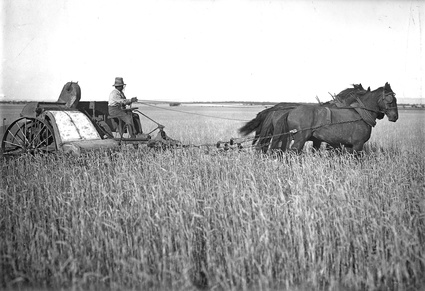 Unfortunately Captain Cook’s glowing accounts of Australia’s soil fertility proved to be a little too enthusiastic. Neither Botany Bay nor Port Jackson were suitable for the growing of cereal crops, and when the time came to cultivate the soil it was found that there were very few people who actually had any idea how to go about growing a crop. There are oblique references in historical accounts of convicts of farming backgrounds who appear to have had more idea than their British masters when it came to agriculture, however their opinions were rarely listened to.

So Australia’s grain industry had a shaky start, but what began as a small plot in a Government Farm in the middle of Sydney gradually increased as explorers opened up our vast country. The acreage put under the one-way plough increased dramatically through the 1830s and 1840s with the formation of the states of Victoria, Western Australia and South Australia. Further expansion into New South Wales and the influx of immigrants during the Gold Rush of the 1850s increased the interest in the viability of crops. People needed to be fed and bread was the staff of life. The construction of the inland railways was another major factor in the development of the industry. The more remote farmers were now able to transport their produce far more efficiently to major cities and ports which in turn opened up export markets. Wheat was first exported abroad in 1845, although it would be a good thirty years before this became a regular event. 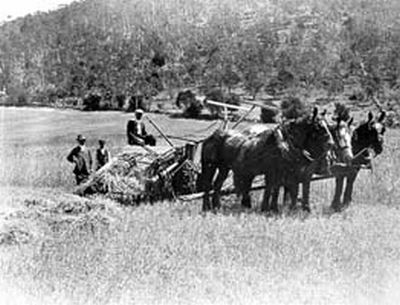 In many parts of Australia each decade from the 1830s on saw more land being turned to the cultivation of crops, firstly through government sponsored exploration and innovation and then the introduction of mixed farms. These advances were complemented by the wide spread use of tractors on farms, in particular from the First World War on. By the 1930s fertilizers and improved cultivation techniques along with the early bulk handling systems of the 1940s were in play, although even in the early 1960s it was not unusual to see rows of 180 pound wheat bags sitting in rows outside depots.

I’m sure if Captain Arthur Phillip could be with us today, he would be amazed to see the versatility of our grain products. Australian wheat-based noodle, bread and bakery products can be found across the globe and our sorghum fattens some of the best beef in the world. It’s a far cry from the early settlement staple of weevil infested johnny-cakes cooked over a camp-fire.