My Brother Jack. If ever there was a portrait of the changing and fragile relationships in family and particularly between brother’s then this work stands out as one of the best. Set in the suburbs of Melbourne between the two wars George Johnston’s 1964 novel shines a light on the interwar years, introducing us to two brothers at a time of great change. David is the quieter of the two boys living in the shadow of his brother Jack who is everything he isn’t. Jack is presented as the archetype of the Australian male at that time. A man’s man, a drinker and fighter. In comparison David is a loner more content with books and writing than Jack’s hurly-burly existence. 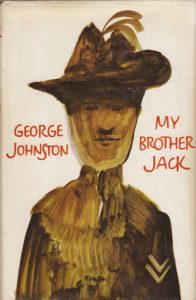 As the two brothers try to forge their own lives in a home ruled by an abusive father and a caring mother it becomes inevitable that age and personality differences see them grow apart. David becomes a journalist and after years of feeling second-best, discovers with the outbreak of World War II that his reporting role is considered too important for him to enlist. This dramatic role reversal is testament to David’s success. In comparison Jack rushes to sign up and do his duty. But accomplishment is not always what we perceive it to be and the question of which brother lives a more authentic fulfilling life explores two Australian myths – that of the man who loses his soul as he gains worldly success, and that of the tough, honest, Aussie battler.