The Magic Pudding is said to have been written to settle an argument. Norman Lindsay’s friend Bertram Stevens said, that children like to read about fairies, while Lindsay asserted that they would rather read about food and fighting. Food and fighting clearly won for October 12 was declared ‘Pudding Day’ in 2008 in honor of Norman Lindsay’s children’s book, The Magic Pudding.

Set in Australia with humans mixing with anthropomorphic animals, it’s the story of a magic pudding which, no matter how often it is eaten, always reforms in order to be eaten again. The three companions who own the pudding must defend it against Pudding Thieves who want it for themselves. 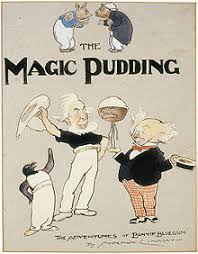 The book is divided into four “slices” instead of chapters. If you haven’t ever read it, here’s a brief taste….

…Wanting to see the world, Bunyip Bluegum the koala sets out on his travels, taking only a walking stick. At about lunchtime, feeling more than slightly peckish, he meets Bill Barnacle the sailor and Sam Sawnoff the penguin who are eating a pudding. The pudding is a magic one which, no matter how much one eats it, always reforms into a whole pudding again. He’s called Albert, has thin arms and legs and is bad-tempered and ill-mannered. His only pleasure is being eaten …

This classic of Australian Children’s literature celebrates 100 years of publication today. For those of us who remember The Magic Pudding, tonight might be a good time to indulge in dessert!