The rise and fall of Constantinople (Istanbul) the magnificent eastern Roman city that endured for 1000 years must surely be one of history’s great stories. How Richard Fidler managed to break all those years into bite sized chunks and make it accessible is quite astounding. His young son forms part of the narrative following a trip they took to the ancient city in 2014 so we also have glimpses of an ever-evolving father-son relationship which lightens this weighty work, allowing us to pause between emperors, religion, palace scheming’s, wars, destruction and general mayhem. 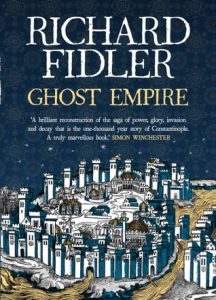 The work is extraordinary. Half-way through I was searching for a time-line so I could keep better track of people and incidents, but I soon realised the book would have ended up as a block for a car had that been included. It makes you wish you’d been gifted with a photographic memory. Atilla the Hun, Genghis Ghan, Charlemagne, Muhammad, Jesus Christ. Everyone features and the human drama unfolds long-side the telling of important events. Most significantly perhaps Constantine who kept himself busy by killing off would-be successors – his own sons, while converting his subjects to Christianity (Constantine is rightly credited with the spread of the religion today). And of course for lovers of architecture we have the famed Blue Mosque and the Hagia Sophia.

The rise of Constantinople is fascinating. This was a fabled city of marble and silks. Impenetrable to invading armies until near the end it appeared like a dream to visitors. Fidler does a nice job of explaining how wealthy English Lords coming from cold castles and steeped in the peasant feudal system would have felt upon entering the city.

Constantinople, the city and the lands under Roman rule fall in a gradual decline that is both bloody and strangely sad. So much beauty and power. So much barbarism. Eventually this mighty Empire becomes fair game for the Fourth Crusade. If you ever had doubts about the crusaders and their morals. You were right. Camelot this isn’t. But in the very beginning I think the legendary King Arthur would have been proud.