A stone woolshed standing the test of time

Standing the test of time, Gorrin Woolshed is located about 20km south-south-east of Ararat, a Victorian town with an economy dominated by the wool and beef industries. The area is steeped in history, enriched with stories from its gold mining past and its flourishing pastoral land. Land that now sustains a number of well-known wineries.

The Gorrin Woolshed itself is part of the structure of buildings that make up Gorrin Station. Built in 1867 for the wealthy James Richardson, it was constructed from coursed masonry, stone and completed with a corrugated iron roof, it’s thought to be one of the earliest stone structures of its kind in Victoria. Like many buildings of its time, much of the materials used to construct the woolshed were sourced from the property itself.

This practice of using locally sourced construction materials makes Gorrin Woolshed a standout example of vernacular construction. A term which basically means that the building uses local materials, utilizing available space, unique to the locality and largely linked to the forthcoming settlement of the area. 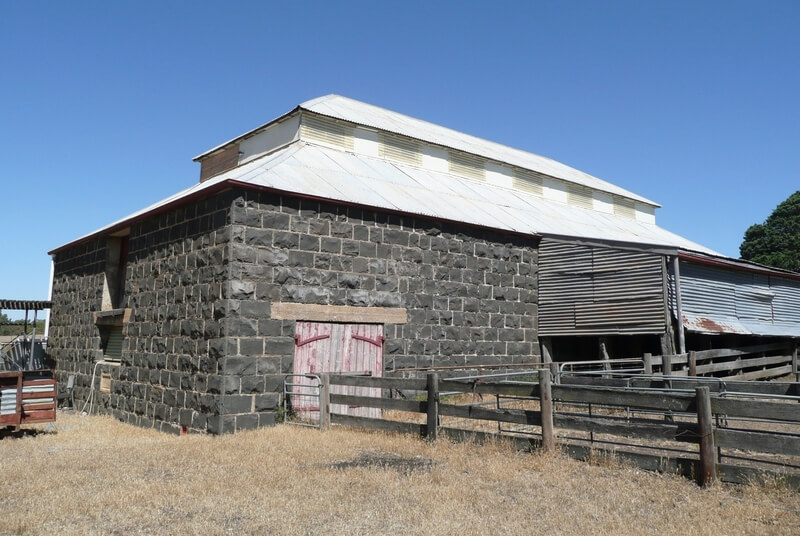 The area around Gorrin Station was considered to be part of New South Wales up until 1851. At that stage the population was around 77,000, and the area then became part of the Colony of Victoria, which had its own government but of course remained a part of the British Empire. Then in 1901, the colony became the state of the new Commonwealth of Australia.

Gorrin’s construction came at a time when huge numbers of Aboriginal groups were being dispossessed of their land, a government policy that allowed squatters to take possession of whatever Aboriginal land they wanted. There were a small number of wealthy Europeans in control of the pastoral licenses in Victoria, which endowed them with both economic and political power that was passed down for years to come.

When Gorrin station was in operation most local workers were chasing jobs in the gold mines, so it was difficult for the woolshed’s owner James Richardson to find dependable labour to run the property. He hired members of the local Indigenous communities who worked to plough, build dams, as well as to carry out lambing and sheep washing on the property. An indispensable labour force that he undoubtedly appreciated.

Now almost 150 years later you can see that Gorrin Woolshed definitely shows signs of wear, but it has stood the test of time and still remains mostly whole today.