How Australia’s first consignment of wool was sold over a cup of coffee in 1821.

It took over twenty years for Australia’s first consignment of wool to be sold at auction following John Macarthur and the Rev. Samuel Marsden’s importation of Spanish merino sheep to Australia in 1797. And when that transaction occurred in London in 1821 it wasn’t in a fancy exchange with hundreds of interested buyers but at Garraway’s Coffee shop in central London. Coffee houses in London arrived in the late 17th century and throughout the 18th century were so popular that certain coffee houses quickly attracted specific clients. For example, writers might frequent one coffee house, while politicians and merchants each had their own preferred venue. They were quickly favoured over Inns which were noisy and crowded and became the preferred places for doing business as well as socialising. It was in one of these coffee-houses that Edward Lloyd in the 1680s successfully built up a clientele consisting of shipping merchants from which developed the Lloyd’s of London insurance market.

Garraway’s was destroyed in the Great Fire of London in 1666 but reopened in Exchange Alley in 1669 which was located in the hub of the financial world. About 80 years later the building burnt down again and was rebuilt. It finally closed in 1866 but not before it had become a prime player in what was the beginning of Australia’s fledgling pastoral industry. Garraway’s was one of the best-known places for merchants to meet, particularly those trading in furs, although wool also proved popular. As well as coffee Thomas Garraway had a good reputation for his ale and sherry and was amongst the first to serve tea. I imagine the wool merchants who gathered there quickly spread word of those colonials in a distant land who in a rather short space of time had gone from eating and breeding the fat-tailed sheep which had first arrived with the First Fleet through to actually producing wool. 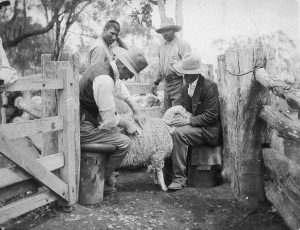 By 1840, Australia was producing more than two million kilos of wool each year. The wool industry boomed. Squatters and pastoralists became millionaires overnight. Sheep breeders gathered in numbers in metropolitan centres to buy and sell stock and wool each year.

The Sydney Mail described the scene at the Sydney Wool Exchange in 1897:

‘One of the most remarkable sights in Sydney is that of the Wool Exchange in full blast. both buyers and brokers are men of weight and substance and responsibility in the community, but when the auctioneer puts up a lot the buyers spring to their feet, wave their catalogues over their heads, and shout their bids frantically at the seller… It is not unusual for 100,000 [pounds’] worth of wool to be put through during an afternoon.’
Sydney Mail, October 16, 1897

We may no longer ride on the sheep’s back, but it was the wool industry that helped build this country that we love today.