How a cow and a calf led mobs of cattle across the Darling River.

“Wilcannia, city of wind and dust,
Queen of the western plains;
Where man works for his daily crust,
And it seldom ever rains.”   (The Barrier Miner, Friday, November 3, 1939.)

The Burke and Wills expedition is well known.  Burke’s impatience on reaching Cooper’s Creek on November 11, 1860 and the unfolding disaster that transpired became one of the most ill-fated excursions in Australia’s history. What is probably forgotten is that Menindee located 100 miles below Wilcannia was their thirty-fourth camp since the party had left Victoria. Having arrived there from Melbourne on 14 October 1860 they crossed the Darling River at Kinchega Station and made camp. The men argued and Burke split the party heading north to Cooper Creek with half the men, stores and animals.

The failure of this trek into the unknown didn’t deter settlers eager to find new lands and they began moving into the Cooper’s Creek district with Wilcannia gradually becoming a starting point for pioneering adventurers. Sheep were on most people’s minds when it came to imagining the great fortunes to be made however cattle also featured heavily in those early years. 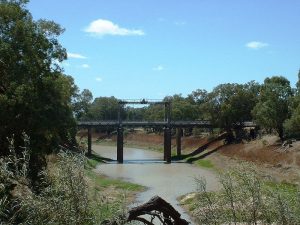 Cattle being driven down south to Victoria for sale from further inland had to swim the mighty Darling River at Wilcannia. While today the river goes dry in times of drought it was once a major river port for paddle-steamers transporting wool and wheat, equalling Echuca in fame. Wilcannia was proclaimed in 1866 and just under twenty years later had a population of 3000 and 13 hotels and its own newspaper, the Western Grazier. But back to those cattle.

Getting cattle across the Darling before the Wilcannia Bridge was built was no easy task. It was a difficult job forcing them into the water and once mid-stream many panicked in the deep currents and drowned unless a stockman crossed the river with them on horseback. Local identity Jack Burgess, a stockman and drover of note was in demand for his services in those pre-bridge days for his ability to get cattle across the Darling without losses.

Jack had a cow and a calf. The calf was actually a full-grown bull but the cow was its mother. Jack would send this tamed and well-trained pair across the river. First the cow and then the calf. The bull naturally following its mother. The mob would soon follow. If there were any problems Jack would swim his horse into the river and then getting out of the saddle walk on the herd’s backs hitting them with a stock-whip until they reached the opposite bank, safely.

“Jack Burgess’ cow and calf” were justly famous in their own right.