For a bushranger to be hanged but also dissected for scientific purposes in order to explore the possibility of abnormalities, you’d imagine some strange behavioural type or perhaps the very worst of crimes. Although the facts remain a little hazy, the truth gone with Alexander Pearce to his grave, there is little doubt that the Australian bush was unnavigable to men at times and that death was a certainty if food couldn’t be found. Alexander Pearce (1790 – 1824) convicted for stealing six pairs of shoes in Armagh, County Monaghan, Ireland was sentenced to seven years hard labour and sent to Van Dieman’s Land in 1819. Three years later he was on the run and wanted for committing various crimes. By the time he’d been recaptured and sent to the infamous Sarah Island in Macquarie Harbour (see picture below) he’d escaped twice, received four floggings varying between fifty and 25 lashes for such things as embezzling two turkeys and three ducks and being drunk and disorderly, and he’d also spent six months working in chains for stealing a wheelbarrow. From the very beginning he wasn’t exactly a model prisoner. 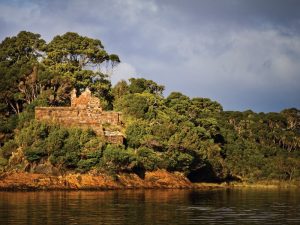 In late 1822 Pearce escaped again along with seven other convicts including Robert Greenhill the self-appointed leader. Pearce’s notoriety was on its way to being forged. After two weeks starving in the bush and desperate for food the men did the extraordinary. They drew lots to see who would be killed for food. The unlucky owner of the short-straw was murdered by Greenhill with an axe and then eaten. Three of the men took off in fear, a reasonable enough excuse.

Before hunger struck again, Pearce quickly sided with Greenhill and another man Travers in order to spare himself death and in doing so targeted the remaining man, Mather who was the next to succumb to the axe. Food it seemed was impossible to find and when Travers was bitten by a snake and death became imminent he was the third man to die and to presumably be eaten.

With two men left, Greenhill and Pearce, one can imagine that there were some sleepless nights in the scrub. The story goes that it was Greenhill who had custody of the axe, but Pearce was wily enough to steal it from him and when he did Pearce murdered Greenhill with a chop to the head and ate him. He went on to raid Aboriginal campsites for food and when he reached more settled districts joined a sheep-stealing ring of bushrangers. It was while with this group that Pearce was finally captured however the magistrate didn’t believe his inconsistent cannibalism confession and sent him back to goal. A year later he’d escaped again with another man, Thomas Cox. This time when Pearce was recaptured, parts of Cox’s body were found on Pearce even though he still had other food in his possession. With cannibalism finally confirmed, Pearce was hanged nearly five years after his arrival at the ends of the earth. Handing over the body for dissection was not a normal occurrence but from a nineteenth century perspective, cannibalising the body of a cannibal for scientific reasons probably made perfect sense.