For more than eighty years Quail’s saddlery business made, supplied and repaired harnesses, saddles and all manner of leather goods in the Cooma region. What makes this business so fascinating is that it endured through the advent of the motorcar, aeroplane, trains, buses, two world wars and a depression, finally closing in 1972. The longevity of the business and the interest of Mr Neville Locker of Cooma who eventually purchased the entire contents of the saddlery workshop has left us with a time capsule of an age-old tradition. Mr Locker eventually donated the entire workshop contents to the National Museum of Australia. 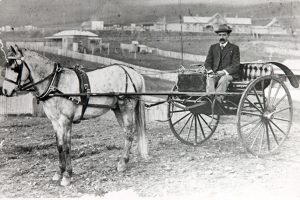 William Quail was only 15 years old when he began an apprenticeship with Robert Pollock of the Cooma Saddlery Mart. Six years later in 1890 he opened his own business on Vale Street. He’d completed his apprenticeship by this stage but four years later he was bankrupt, a victim of a stagnant economy, drought and location – the new business was located away from the main shopping thoroughfare. Like many successful people who fail before they succeed William didn’t give up. Moving to Nimmitabel he continued working in saddlery eventually strengthening and establishing his reputation. By 1905 he’d succeeded in purchasing a saddlery business in Cooma (1903) and had opened a new workshop in Bemboka while retaining his interests in Nimmitabel. 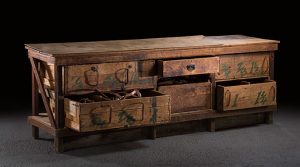 William passed on in 1957 and his son Hugh continued the family legacy until the store finally closed. The National Museum of Australia is custodian of more than 3,000 objects, many of them of sufficient age that they were likely used by William Quail in the early years of his business. There is furniture, machinery, patterns and finished and unfinished leatherwork. But one of my favourite objects would have to be the life-size model horse that once stood outside the saddlery premises in Cooma, New South Wales.  William was a fine horseman. He bred, showed and raced horses and his love of them undoubtedly showed in his craftsmanship and business longevity.