Washing sheep was a great enterprise at Windy Station.

The landscape is dominated by the presence of the rustic Windy Station Woolshed near Quirindi, a small town on the North West Slopes region of New South Wales. Said to resemble the Finger Wharves of Sydney that were built around the same time, with its federation carpenter style construction and rich history it is one of the more unique Australian woolsheds still standing today.

The property was originally known as ‘Warrah Station’, east and west, until the Australian Agricultural Company (A.A. Co) constructed the woolshed at West Warrah in 1901/2, and renamed it ‘Windy Station’. The A.A. Co is one of Australia’s oldest companies. 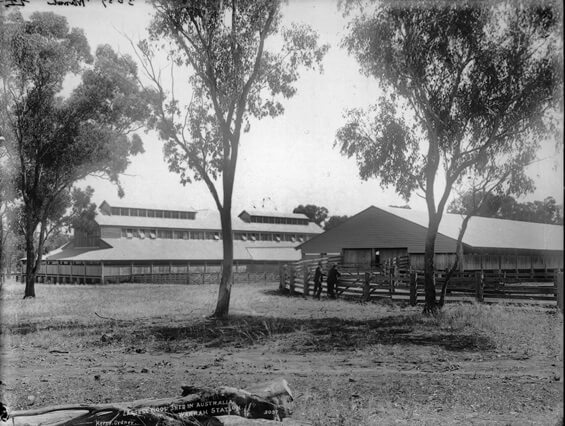 The British Parliament established the A.A. CO in London in 1824, and their focus was to ensure the colony was achieving success in the fine wool industry, along with other crops and exports, and eventually coal mining. They provided the colony with free workers, including many convicts, and acted to ensure the future of the fine wool industry in Australia. They were granted the Warrah property, along with 360 acres at Goonoo Goonoo, as both properties were so well suited to raising fine-wool sheep.

The A.A. Co built the Windy woolshed with 44 shearing stands, and it was constructed completely out of wood and corrugated iron. Most of the timber was sourced locally from the property, but the builders soon found that the sawmill couldn’t keep up with demand, so timber was brought in from other locations. It is a fine example of the technological and design development of woolsheds across NSW during the 19th Century.

Over time the Windy Woolshed established itself as one of the more profitable shearing sheds in Australia, and it is a great example of innovative and efficient shearing procedures. It was operating at a time when the wool industry was a huge contributor to Australia’s economic growth, and New South Wales was the dominant wool producing state. Windy Station was known for its technology, productivity and efficiency, fine-tuning the shearing process from start to finish.

As part of that process sheep were washed to remove any dirt, grease and other material from their fleece. The first wash site was at East Warrah, but a larger wash site was later created west of, and adjacent to Warrah Creek. The sheep were washed in a soak-tank filled with hot water, soap and caustic soda, with 16 men capable of washing up to 1500 sheep per day. You can just imagine the men toiling by the creek in the blistering sun, washing sheep after sheep, transferring them to the sheds to be sheared.

Over one hundred years on, Windy Woolshed still stands in good stead. Now a heritage listed structure, sheep still run on the property.