High country in the Victorian Alps

High Country in the Victorian Alps. Home to the legendary cattlemen immortalised by poet AB ‘Banjo’ Paterson in ‘The Man from Snowy River’. You can still find their historic huts built by the cattlemen for shelter when driving their cattle up to the plains in summer. These age-old buildings have provided protection from the weather and timely rest spots for generations of cattlemen and women. 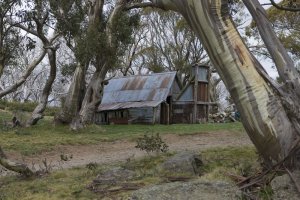 Wallace Hut (first picture)near Falls Creek, is one of over 100 huts scattered across the Alpine National Park. The oldest hut in the park (Built 1889) it was constructed by the three Wallace brothers – Arthur, William and Stewart. The boys arrived with their parents as small boys in Melbourne from Ireland in 1869. Eventually becoming cattlemen in the high country their livelihood ended with the declaration of the Alpine National Park.
The hut is made from snowgum and woollybutt and originally had a timber shingle roof, however this was replaced with corrugated iron in 1946 when the building was used as a workmen’s hut by the State Electricity Commission. 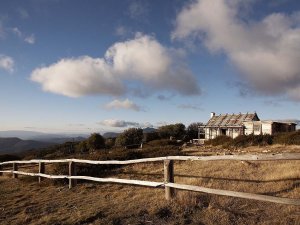 Probably the most famous High Country hut is Craig’s Hut (above). Perched atop Mt Stirling with stunning views of the ranges, it was first erected as a set for ‘The Man From Snowy River’ film in the early 1880s. Since then the hut has taken on a greater role as an iconic symbol of Australia’s settler history as well as cementing the importance of the motion picture in Australia’s folklore. Destroyed by fire in 2006 it was completely rebuilt.