The Casterton Kelpie Association has been holding the Clark Rubber Australian Kelpie Muster in Casterton, VIC for 20 years.  Over that period it has certainly become an iconic event with people travelling from all over Australia to buy or sell their working dogs at what is the Premier Working Dog Auction in Australia.  Held over the long weekend this year 9,000 people attended, and that’s without counting the four-legged’s.

The highlight of the weekend which includes an art show and street parade, is the Working Dog Auction. Here the dogs demonstrate their talents while being worked by their current owner. Sheep must be moved around a course within a time limit allowing potential buyers to check out an animal’s ability. Its a great way to see how well bred and trained dogs listed for sale perform.

And the performers get top dollar at auction. This year a 17-month-old black and tan kelpie named Burgess (owned by Andrew Kennedy) sold for $10,000.00 at the auction. 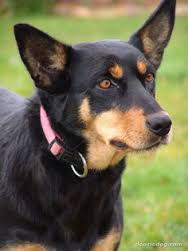 For the spectators there is also the thrill of watching animals perform at the highest level. The World Record for the Kelpie High Jump was broken at this year’s muster with a height of 2.951 by Tegan Eagle from Croydon, Victoria with her dog Bailey. This record has been standing since 2007.

As one spectator was overheard commenting, ‘there’s money in dogs’. But his friend wasn’t so sure, ‘only if you’ve got shares in a dog biscuit company mate,’ he replied.