Working dogs, stock whips and horses – the tools of trade for the traditional stockman in Australia. It is difficult to adequately define the characteristics required of a good stockman or woman however they are keen observers of livestock with the natural ability to handle them with patient knowledge. The role of the stockman came into its own over two hundred years ago when the Blue Mountains of New South Wales were crossed in 1813. With the town of Bathurst founded soon after, settlers moved in. Land was claimed, portions noted on previously unmarked maps and homesteads built. Livestock lay at the foundation of a successful business. In the early years of settlement beyond the range sheep were overlanded to these fledgling properties. As many of these holdings were large and mainly unfenced they required shepherds to watch over their flocks and it was quickly recognised that stockmen were vital to the success of a property where the welfare of highly valuable animals was at stake.

Early stockmen were carefully selected and well respected. In an age when the great woolgrowers of the colony could make ‘the patriarchs of the bible appear like beggars’ (unattributed quote), the value of a good stockman was on a par with those resilient expedition men who could pave the way through the scrub beyond the outer limits leading settlers and all their worldly possessions into unchartered territory and vacant fertile lands.

Australian Aborigines were also integral to the running of many stations. As stockmen, their local knowledge was unsurpassed. During and particularly after the gold rushes white labour was difficult to obtain and the first Australians filled this void. Aboriginal women also worked with cattle on properties in northern Australia in the late 1800s however a Native Administration Act later stopped this practice.  Aborigines and their families received the regular provision of ‘stores’ – food and clothing, but were rarely paid a wage. In comparison by 1911, the average rural stockman was receiving £1 to £1/5/- a week plus keep. One hundred years previously, a head stockman could command nearly triple that amount depending on where a property was located. If a station was situated beyond the boundaries of the colony and therefore the reach of the law, an increase in the wage that could be demanded by top men was reflected in the risk involved, particularly from the indigenous inhabitants. 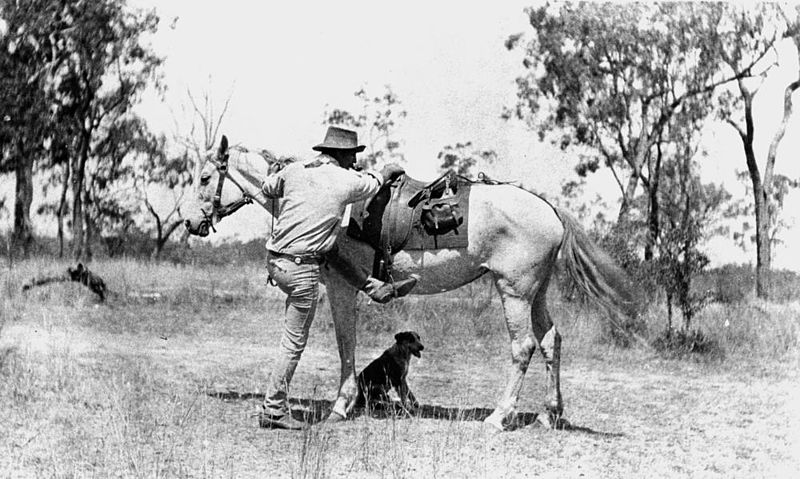 By 1918 wages had increased by up to 50 per cent, with Head stockmen receiving about £1 extra. While stockmen and women now work under a state or federal award, wages are still determined by a properties location and the availability of staff. The adage, good men and women are hard to find applies even more in today’s rural Australia.

A wide-brimmed felt hat, a plaited kangaroo skin belt, brown elastic-side boots, quart-pot and saddle-bag, all standard attire for stockmen and women have been added to over the decades. Now there are two-way radios and mobile phones to converse with other musterers and helicopter pilots, motor-bikes, quad-runners and the paddock-basher (unregistered ute or sturdy 4WD) competing for space in this once horse only domain.