The naive art of Hugh Schulz & the Brushmen of the Bush.

Hugh Schulz’s art has appeared in many Australian and international books on Naive Art, this is a wonderfully expressive term for a man who was an exponent of what is commonly considered a more childlike approach to art. There is something quite enchanting about his work, as if he has turned a magnifying glass on his world and rendered his chosen subjects in a way that makes the viewer smile at his detailed observations. Hugh was one of the Brushmen of the bush and he set himself apart from this talented grouping with his simplicity and frankness of style. Like Jack Absalom, he was also a self-taught artist who turned to art late in life in his mid-forties after a varied career spent mainly in the outback. 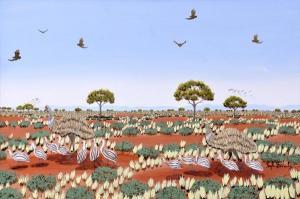 Hugh loved his country. Broken Hill. The breath of sky and land. The way the light could turn a quartz rock to glimmering crystal and a distant dune into a world unto itself. His favourite subjects were simple things like birds and flowers and he also enjoyed painting the rock formations that make Broken Hill and its environs so extraordinary. 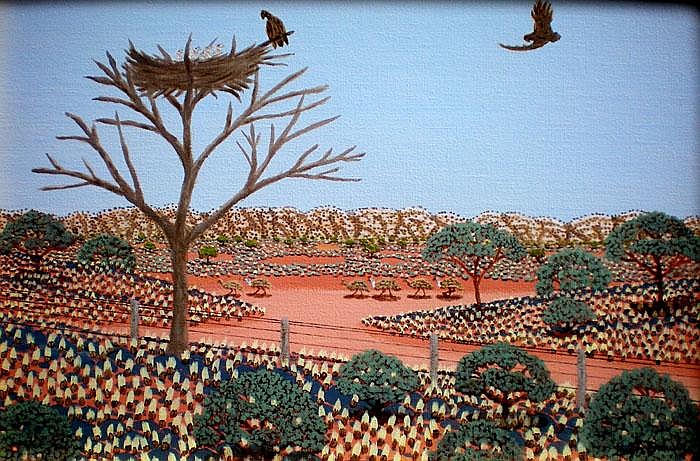 Schulz was only four years old when his mother died. Broken Hill then became his home where he spent most of his childhood with the NSW Trustee and Guardian. By fifteen he was ready for the workforce and the mines. He continued mining, mostly at Kalgoorlie until he joined the army, serving with the 2nd A.I.F as an infantry engineer. After the war, marriage and a family beckoned and he settled once again in Broken Hill where years later his interest in art began to grow after helping his daughter illustrate projects for school homework. 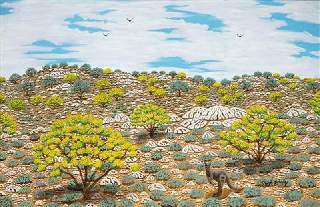 Nobody knows exactly when the first naive artists appeared on the scene, but like Hugh they seem to have quite unconsciously bequeathed us unmistakable signs of their creative activity. To look at one of Hugh’s paintings is to enter another world. A whimsical place where nature rules and in the majority, man is very much an outsider.