Born west of Geelong in 1867, Arthur Streeton’s only professional training was at the National Gallery of Victoria. He began painting city life in Sydney, then moved further afield to paint the Blue Mountains and Hawkesbury river regions. He had a brilliant ability to inject light and space into his work, creating paintings that captured the true essence of the Australian landscape. He was an artist influenced by French Impressionism, but also deeply inspired by the painters he befriended throughout his life.

Arthur Streeton found solace and inspiration near Heidelberg in Victoria. A friend let him to stay in an abandoned home on the summit of Mount Eagle and from here he looked out over stunning views of the Yarra Valley, to the Dandenongs. It proved to be the perfect landscape for his painting escapades. Living out what would seem to be a dream for any artist, it’s said that Arthur would head off into the bush everyday, with a handful of paint and canvasses, and a billycan of milk.

(Above: Still glides the stream, and shall for ever glide, 1890, Art Gallery of New South Wales ) 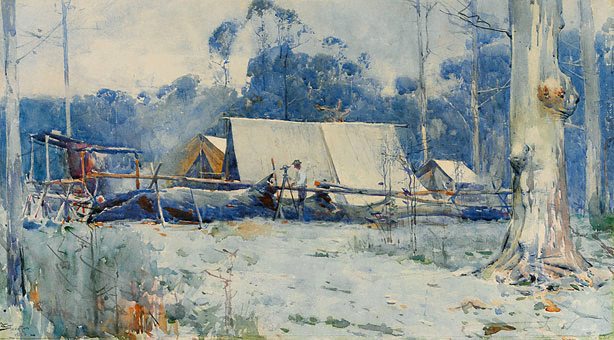