The grazier who was put in charge of the Australian Imperial Force.

“Such a man, could scarcely fail to be a hero to his men” – The grazier who became a Major General.

Bull Ryrie was tough, an outgoing man of the Monaro who could ride like the wind as well as being a crack shot. Born into a grazing family, after attending the King’s School at Parramatta he became a jackeroo and went on to manage his own property. However Bull or Major General Sir Granville de Laune Ryrie KCMG, CB, VD  , would during his lifetime come to epitomise what it meant to be a great Australian (below Ryrie inspecting troops). 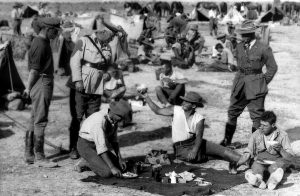 Ryrie volunteered for the Second Boer War (1899-1902) joining one of the Bushmen’s Contingents or groups of Light Horsemen and whilst serving was promoted to the position of honorary Major. A colonel at the outbreak of the First World War Ryrie then served at Gallipoli – where he was wounded twice, and at the Battle of Gaza. He went on to be present for the advances through Palestine until the end of the war.

Ryrie was the type of man that men followed. Never one to shirk danger or deprivation he loved the work carried out by the Light Horsemen. The official historian of the period remarked:

“Such a man, could scarcely fail to be a hero to his men”

(Below image: Ryrie with The Prince of Wales, Sir John Monash is behind him.) 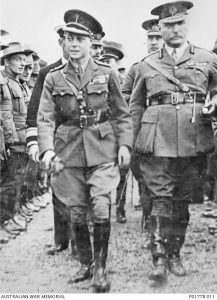 He was involved in the famous charge of the light horse at Beersheba and in the December of 1918 was made commander of the ANZAC Mounted Division, and in April 1919 was put in charge of the Australian Imperial Force, before eventually being  promoted to Major General.

After the war Ryrie became the member for North Sydney and went on to have an illustrious political career. Appointed the Australian High Commissioner to the United Kingdom in London, he was also an Australian delegate to the League of Nations. At his death he was honoured with a State funeral and is buried on the family property Michelago, NSW.  One of many great men of the period. (Major General Sir Granville de Laune Ryrie: 1 July 1865 – 2 October 1937) Lest we forget.