In the mid north rangelands of Western Australia, at the headwater of the Gascoyne River is a station that dates back to 1884.

Australian pastoralist Frederick Wittenoom was among the first Europeans to explore the pastoral opportunities in and around the Gascoyne River area, acquiring Three Rivers with B.J Carlyon. He stocked the holding with cattle from Nookawarra Station, a property he shared with his brother Sir Edward Wittenoom and set about making use of the 480,000 ha property which was predominantly covered in good grassland. With the soil a mix of sand, silt and clay, Wittenoon recognised the holding’s potential as perfect grazing for sheep and cattle, as well as wool production.

The station changed hands over the ensuing years and initially perhaps became more widely known for a series of incidents that occurred over the decades rather than its production capabilities. The property’s shearing shed with its distinctive curved roof was built in the 1920s from timber and iron, with the ramps and yards built from bush timber. The structure was impressive with space to hold up to 500 sheep under cover, and prior to the drought years of the 1930s 33,000 head of sheep were shorn at the station. 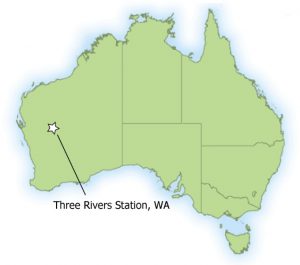 But back to those events. In 1926 shearer Harry Pindlay sheared 301 sheep in one day; an impressive feet which was followed by a tragedy two years later when Wesley Hall Taylor accidentally shot himself in the head with a shotgun and died. Over a decade later, in 1940 the station’s bookkeeper Paul Hanson collapsed and died in his car. With him at the time was a woman who couldn’t drive and with a distance of 25 miles between where she was stranded with the body and the homestead, she endured an excruciating 3 days and 3 nights until the station manager John Bowman eventually found her. There’s more, including an escapee from Barton’s Mill Prison Farm who was arrested on the holding in the 1950s. 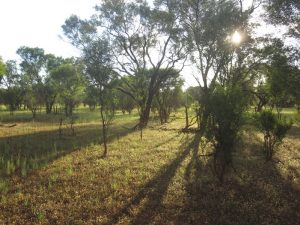 Three Rivers has suffered a chequered history. Notwithstanding the mis-adventures and accomplishments there have also been numerous droughts, followed by the gold-mining boom, and finally the take-over of the lease of the property by the Plutonic mining company. But time will show that the most important milestone in the properties history is the work undertaken by the Forsyth family

In 1973 the Forsyth’s purchased the nearby Bryah Station, and they expanded to join Three Rivers. They sub-leased back the grazing rights, and eventually through decreased stocking capability realized that the holding required substantial regeneration if the business was to be on-going. They set about the massive task of bringing life back to the pastoral land and succeeded. In 2012 400 cows were returned to the property, and the splendid country that Wittenoom first set eyes upon once again showed its potential.

To read more about the regeneration of Three Rivers Station visit here.