It’s 1969 and a remote coastal town in Western Australia is poised to play a pivotal part in the moon landing. Exciting stuff, particularly for a galah – yes of the feathered variety, called Lucky. On the outskirts of town sits a giant dish, a piece of vital hardware that becomes a major line of communication between NASA and Houston and the Apollo rocket heading to the moon. It’s a line of communication that also beams information into Lucky’s head, and Lucky is the books narrator. 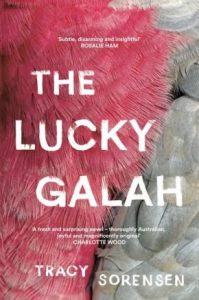 As narrators go, smart-talking Lucky – all dusty pink and grey feathers, is pretty special. She’s terribly aware of a world that’s on the brink of change. It’s the sixties after all but the seventies are only a year away. She knows everything about everybody, gets terribly frustrated that she can’t articulate her thoughts but is generally a loving soul. As radar technician Evan Johnson and his colleagues stare at the screen, transfixed, Armstrong takes that first small step and Lucky begins to spill the seed on how her unlucky life became, lucky.

Of course being a galah Lucky’s world is filled with opinions, gossip and scandal, just as you would probably expect a galah to think and behave. Blame this feathered mouth-piece for a wonderfully nostalgic journey into our past and be prepared to have this bubbly bird place the spy-glass on us humans.