Lightning Ridge – A town of contrasts

The name Lightning Ridge is said to have originated in the 1870’s when the body of a grazier, his dog and 600 sheep were found, thought to have been struck by lightning. With such inauspicious beginnings, quirky seems a strange word to describe this north-west New South Wales town; yet this is a place where there are car doors instead of street signs, a house made of bottles and a church that has never been used as a church. There is the miner who has been creating sandstone carvings 12 metres underground for years and a castle among other oddities.

The Ridge, as it is fondly known is less than two hours’ drive from my property. The back roads via the NSW/QLD border town of Mungindi are usually pretty quiet and when scrub meets civilization courtesy of a bitumen road and the Artesian Hot Baths, you know you’ve reached The Ridge. 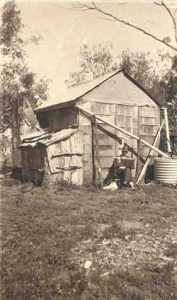 Lightning Ridge is home to Australia’s National gemstone, the opal and has the largest known deposits of black opals and opal gemstones in the world. Previously a favourite with the Asian market, interest in pink and yellow diamonds have seen opal prices decrease substantially, despite the odd major find still occurring. Tourism is very important to the area, although the interest in mining remains, with wily prospectors participating in ballots for twelve-month renewable claims.

You can pick up a map at The Lightning Ridge Visitor Information Centre and head up the Three Mile Road to view old opal diggings, as well as a now obsolete open-cut mine. Brightly painted car doors hanging from trees provide directions. A contrast to the piles of tailings from now defunct claims. These myriad heaps with their antiquated mining machinery have been preserved lending a desolate, if historic air to the town. 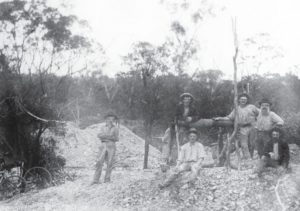 At The Ridge, the locals still talk of the occasional ‘ratter’ (mine thieves) and of what really happened out on Lunatic Hill. While tales of murder, madness and great fortunes abound, the truth is somewhat more practical. In the early 1900s old timers laughed at the miners on the hill who ‘bottomed’ out their opal mines at fifty to sixty feet. With the average depth at the Three Mile Flat, eighteen feet, it was considered that only lunatics would dig that deep for opal. 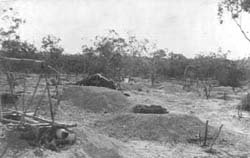 The area is also an important paleontological site, with fossils dating back to the Cretaceous period, 110 million years ago. Rare finds of opalised fossils have been discovered by miners and can be seen at the Australian Opal Centre, as well as a display of early pioneering life on the opal fields. Next door is the Chambers of the Black Hand. Twice-daily guided tours take visitors twelve feet underground to a series of catacomb-like rooms where dinosaurs, Chinese warriors and creatures from mythology emerge from the sandstone walls. Miner Ron Canlin took on a massive task creating these 500 plus carvings to date with his tools of trade ranging from a jackhammer and small pick to cutlery from his kitchen… Only at Lightning Ridge.