Before today’s supermarkets offered home delivery services, and corner stores supplied busy household’s needs, urban dwellers had access to fresh bread, fruit and vegetables, fish and meat from the many vendors who plied their wares. Some of these tradespeople delivered orders to your front door, milk, bread and meat being staples. Other street-traders swung their carts into a street and began spruiking their produce. Rabbits, a delicacy up until the 1930s depression when they became poor man’s food, were popular and easy to prepare. Sold with the head cut off. The skin pulled free and the innards removed, it was a simple task for the woman of the house to quarter the rabbit, cover the pieces with flour and drop into a pot with milk or cream, raisins, onion and curry powder. It was a tasty meal. And if you needed salad on the side you could be assured of a vendor who announced that his lettuce hearts were as big as heroes. 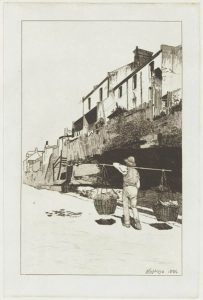 Refrigeration was a problem before electricity became standard. Traders started early and meat not sold by late morning in the summer was discounted heavily and quickly. Before kerosene and electric fridges, ice chests were popular. However, they were an expensive item. Out of reach of many working-class families. For those lucky enough to afford one the iceman was another vendor who came direct to your house. With his cart filled with ice cut into large blocks he would wrap a hunk in hessian, carry it indoors and leave the ice in the chest’s ice compartment. With the first fridge not developed until 1912, the iceman was a popular fellow.

Out in the bush property life remained self-sufficient, but Chinese hawkers could be relied upon to travel inland, often calling at towns and stations and setting up shop for a number of days.  They offered wares not easily available such as dress material, spices, kitchenware and more basic foodstuffs such as flour, rice and salt. And if you were after a touch of the exotic, silks, hand-held fans and bamboo frames were highly prized. We needed savvy tradesmen out in the bush and these men provided a vital service, many of them still doing rounds to properties in the 1960s and 70s.