In the late afternoon of October 31, 1917 around 800 men of the 4th Australian Light Horse Brigade looked from a ridge across six kilometres of sloping ground towards Beersheba. Behind them were thousands of troops desperate for water and a never-ending desert, in front of them, the heavily fortified town of Beersheba. The 4th Australian Light Horse Brigade were about to take part in what is now remembered as history’s last great cavalry charge. The Australian Light horse was to be used purely as cavalry for the first time and although they were not equipped with cavalry sabers, the Turks who faced the Australian’s long bayonets didn’t see much difference between a cavalry charge and a charge by mounted infantry.

The capture of the town was strategically crucial in the Allies march to the Mediterranean port city of Gaza. But of more importance was the seizure of the wells. Around 50-60,000 men were marching across the desert towards Beersheba and unless the Allies could find water quickly their cause against the Turks, the eastern allies of imperial Germany, would be doomed. The need for water for both men and horses was critical. As was the case 4,000 years earlier, the only wells for miles in any direction were at Beersheba. According to the Book of Genesis, Abraham and his son Isaac each made pacts with other men over the water at this place which became known as the ‘Well of Oath’. Babylonians, Assyrians and Philistines had all fought for water here over the centuries. October 31, 1917 was no different. 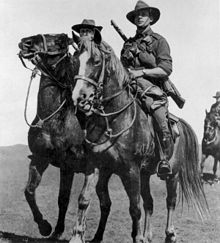 (Australian light horsemen on Walers prior to their departure from Australia. Image courtesy AWM)

The Light Horse moved off at the trot and then immediately to the gallop. The Turkish gunners saw them and immediately fired, however the pace of the charging horses was too fast for the gunners. The horses (whalers – though they came from different parts of Australia, the horses were originally sold in NSW and were perfect for the rough conditions) had smelt the wells and after three days without water they were charging towards it.
Three kilometres from Beersheba Turkish machine-gunners opened fire but British Artillery were quick to detect and silence them. The Turks saw the cavalry spearing towards them and their rifle-fire was wild and high. The Light Horse jumped both the front and main Turkish trenches with some men dismounting and attacking the Turkish soldiers with rifle and bayonet. Other Light Horsemen galloped ahead and seized the rear trenches while the rest galloped straight into Beersheba capturing the town and the water.

Gaza fell a week later and by December 9, the Allies entered Jerusalem. The last great cavalry charge by the 4th Australian Light Horse changed the course of the war in the middle east. In their desperate charge to seize the town before dark it has been written that “they rode for victory and they rode for Australia”.