Why place a character in the middle of no-where? In The Cedar Tree, Italian-raised Stella Moretti marries into the O’Riain family during World War Two and finds herself living on a sheep property on the barren edges of the Strzelecki Desert. Slowly her life unravels. Of course the Far West of NSW, specifically Corner Country, is hardly the middle of no-where however it is remote for more urban dwellers, and in the 1940s it was removed from civilisation. Placing a naïve newly married city-born female character on the fringes of the desert was the ultimate location to test Stella and of course the environment is a marked contrast to the lushness of the Richmond Valley which features in the 1860s section of the novel.

As part of the research for The Cedar Tree I flew to Broken Hill from Moree via Sydney, hired a four-wheel drive and headed north-west for nearly three hours. My destination was an outback station on the NSW–South Australian border, where the wild dog fence stands as a dividing line between states and a Royal Flying Doctor airstrip close to the homestead reminded me of the challenges of isolation. 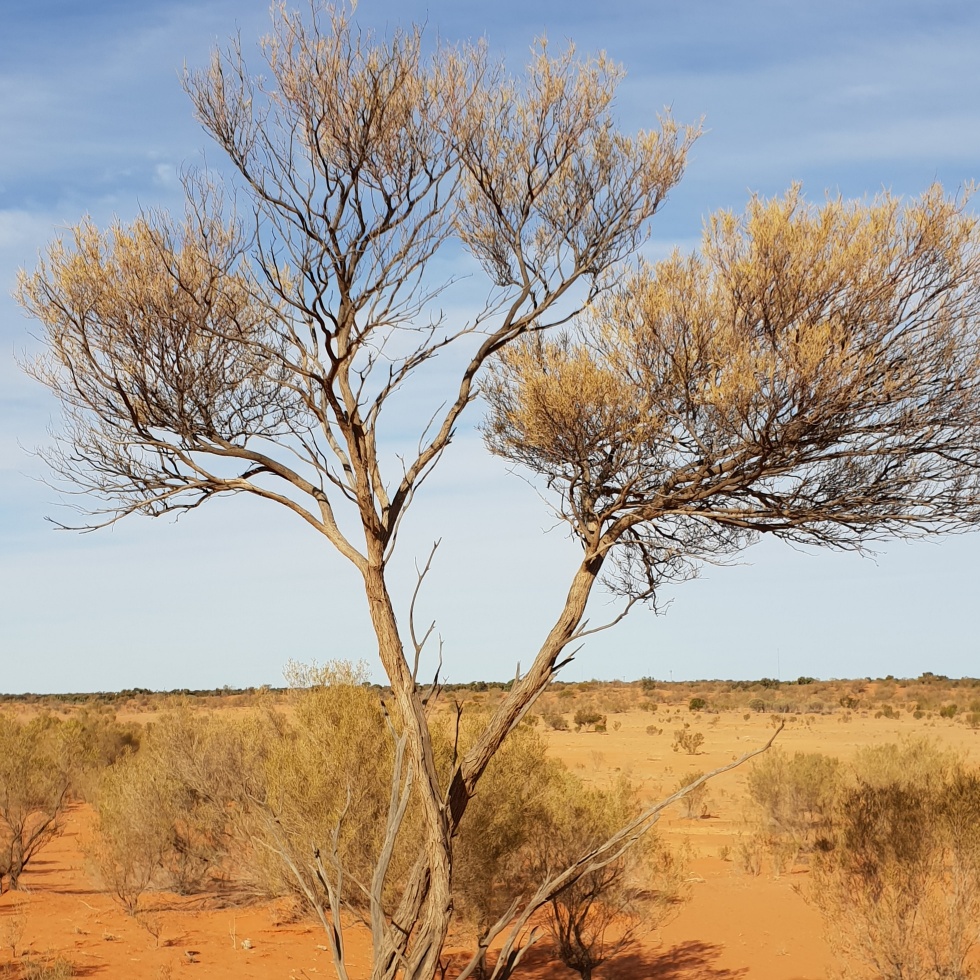 Surveyor-General Sir Thomas Mitchell was the first white man in the area. Three years later, in 1844, Charles Sturt named the Barrier Ranges and mentioned a ‘broken hill’. Although Sturt’s expedition failed to find a great inland sea, their mapping and descriptions of the far northwest helped to open this unknown region. Pastoralists followed the early explorers in the 1850s. This was the beginning of major changes for the local Aboriginal communities: flocks of sheep, fences and mining interrupted their traditional way of life.

I selected this area specifically for its isolation, so that Stella’s expectations of her new life – one she’d chosen for love and to escape her strict Italian culture – were constrained by more than just her husband’s attitude. The owners of the property I visited were very welcoming. I’d enquired in advance if I might access the property to study the environment, and I ended up spending my nights in the main homestead, delving into archives. In the 1940s the Second World War created labour problems across Australia but particularly in remote locations. The state government arranged shearing contractors to circuit the sheds, ensuring wool got to market – we were under contract to Britain during  the war to provide wool for uniforms, however the logistics of finding men to help muster sheep from large paddocks for yarding was a specific problem that was difficult for some stations to address. And the desert provides its own set of unique complications. Sand in sheep’s wool decreased the sale price of the clip but was impossible to eradicate. 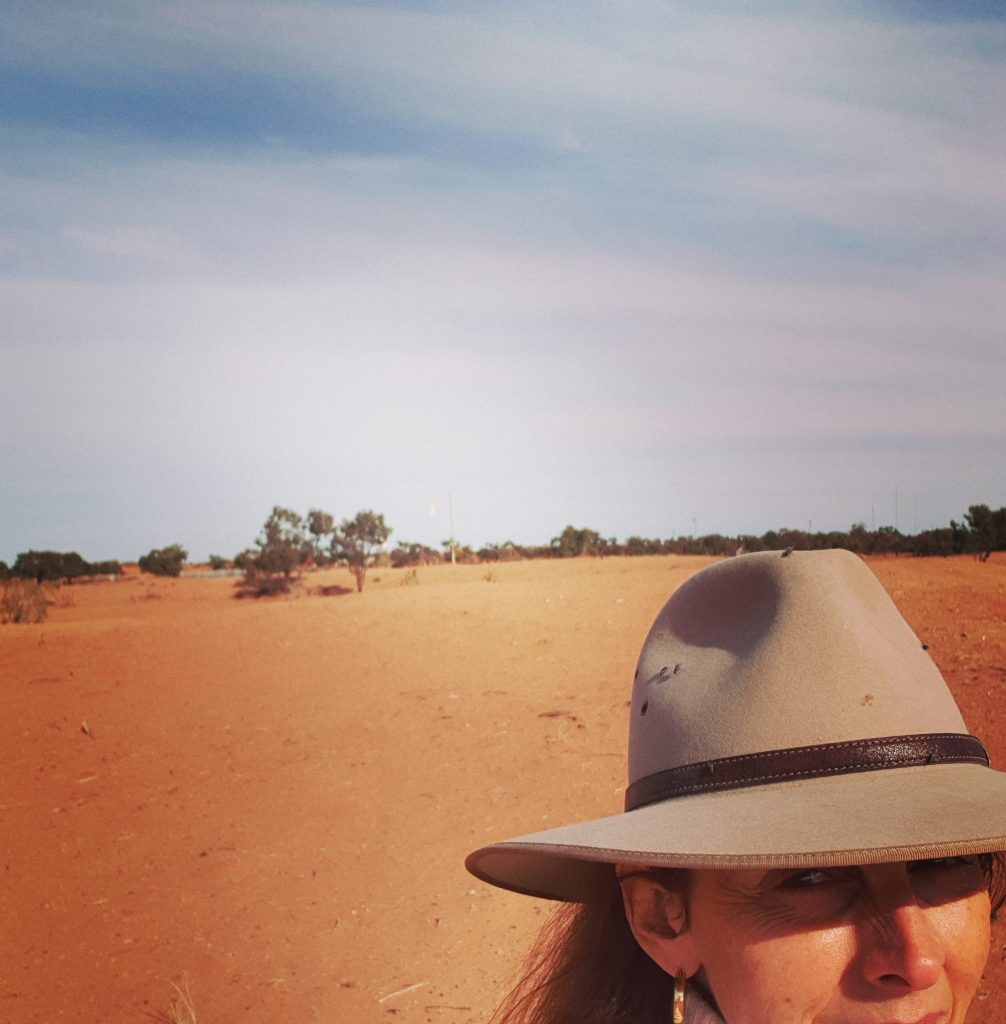 The fringes of the Strzelecki Desert in Far West NSW is an extraordinary environment made up of quartz rock deposits, gibber plains and rolling red dunes. If you’ve been to Broken Hill or further into our interior then you’ll understand that the light is extraordinary. Everything seems more vivid and more engulfing. The Strzelecki Dunefields are part of the Australian continental dunefields, which start in central Australia. Most of the dunefield lies in the Lake Eyre Basin and the edge of the region extends into the NSW corner country. In NSW, the dunes are formed by a westerly wind that moves sand from distant lake shores and sandy deposits. The light glitters across the landscape. The clarity of the air is stunning. Combined with the rich red of the land, the ceaseless dunes and infinite space, the spirituality that whispers of those who dwelt in these areas long before the arrival of white men is tangible. But the desert can be a harsh place. I spent long days roaming massive dunes, the vegetation growing ever more stunted the further west I walked, the taste of salt on my tongue. This is an arid, desolate environment. A place where life is dependent upon water and it’s more than easy to become disorientated. While I ensured I had my compass, map and a full water bottle, eons ago the Aboriginal inhabitants of this region used shallow seepage wells between dunes for drinking water, and foraged native plants and animals to survive.

My in-the-field research is an essential but also one of the most enjoyable aspects of writing historical fiction. Apart from creating a strong sense of place in the narrative, occasionally there is the added bonus of hearing stories from that region. The Far West was no exception. The Wild Dog Destruction Board employs boundary patrollers to maintain the wild dog and dingo fence. Earlier last century, horses were the method of transport and one resilient rider preferred doing his rounds across many miles, buck naked – rain, hail or shine. Why? Because that’s just what he did. Then there was the woman who killed her husband by gradually adding arsenic to his evening meal. Apparently, she simply tired of eating mutton. And there’s many a tale of men who rode away from their homesteads only to succumb to a fit of the ‘willies’ and never return.

Next week I’ll be taking a closer look at Charles Sturt’s travels and his search for Australia’s great inland sea.