An Australian ram, famous for being famously superb.

Famous for being famously superb, the shilling ram was the name given to Uardry 0.1. A merino ram of such style and class that on the 29th June 1932, the Sydney Mail announced that Uardry was, ‘generally acknowledged to be one of the most magnificent Merinos ever seen in Sydney.’ Uardry had for competition 366 other Merino sheep who had all been trucked or railed to Sydney for the 37th Annual Sydney Sheep Show in 1932. However he went onto win his class (under three years of age), was then judged champion strong wool ram and ultimately grand champion.

Now doubt the owners (Uardry Merino stud, Hay, in the NSW Riverina district) were suitably pleased with Uardry 0.1’s win, but there was more to come. Six years later, this famous merino was immortalised on the reverse of the Australian one shilling coin. Uardry stayed there, stamped on our currency for twenty-eight years, until the introduction of decimal currency in 1966. 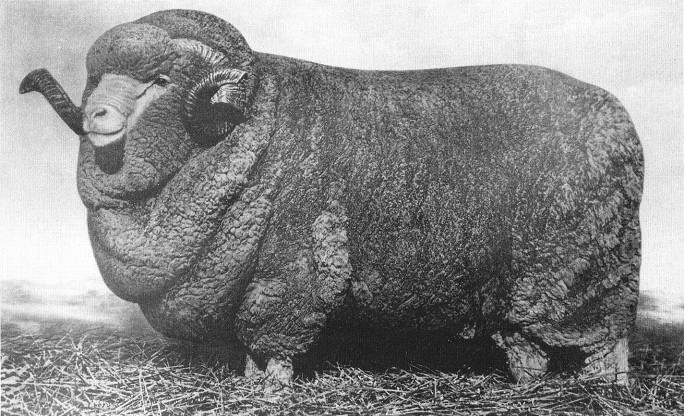 We can wonder why he achieved this place of honour. Certainly word was quick to get around regarding this remarkable animal but perhaps the reason is best left to the judge in Sydney who in 1932 said, ‘He has all the characteristics of greatness in his splendidly-modelled body, his strong head and horns, and his beautiful, soft, richly-crimped fleece’. It was the head and horn placement that so captured merino purists and so the shilling ram was born. Luckily, he didn’t have to put up with Uardry 0.1 as a name for too long. Noted western Australian sheep-classer, Tom Atkinson wrote to the owner of Uardry saying, this is ‘the most magnificent ram I’ve ever seen why don’t you call him Hallmark’. And so, a legend was born.

Hallmark was also pictured on our 50 cent coin in 1991 commemorating the 25th anniversary of decimal currency. I’ve always thought it rather fitting that a ram became such a prominent image in our currency. After all, for years and years Australia did ride on the sheep’s back.