You flick the reins, ensuring the horses keep up a steady pace. The Cobb & Co coach rattles across the pitted track. It’s a quiet country road. The trees stand tall. The bush thick and impenetrable on both sides. You’re half-way to Inverell with a coach-load of passengers and bulging mail bags. You glance at the blue sky and then back to the view above the horse’s heads. A narrow road strings out before you, twisting around corners, before straightening to reveal sheep grazing through the trees. As if sensing the tension, the passengers have grown quiet. Where before there was the amiable laughter and chatter of travellers, now there is only silence. The man seated next to you strokes the cold steel of the rifle slung across his thighs. Your head pivots left to right. You can’t help but feel nervous. Bushrangers have been seen in the area, and not just any bushranger. This one carries the reputation of being the longest roaming outlaw in the Australian bush. He’s canny. Considered a gentleman. But this knowledge does little to alleviate the dryness in your throat. You swallow, finding comfort in the cold steel of the rifle next to you. Frederick Ward better known as Captain Thunderbolt, has robbed mailmen, travellers, inns, stores and stations across much of northern New South Wales – from the Hunter Region north to Queensland and from Tamworth nearly as far west as Bourke. And he’s good at what he does.

You steady the team of horses. Up ahead birds startle from the timber. They fly upwards. Outstretched wings against that pale blue sky. And then they are there. Straight ahead. Appearing like ghosts through the silver-barked gums. Four horsemen in the middle of the road. The leader, a bushy-bearded individual wedges the butt of his rifle near his hip and with the slightest tap of spur to flank, walks his mount slowly forward. You draw hard on the reins and your horses scatter dirt and small stones in response, the coach creaks to a stop. 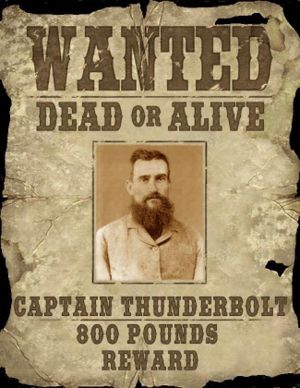