Bathurst, NSW: Construct a one-hundred-mile road in six months, proclaim a township, disrupt the indigenous population, discover gold and begin taming the land; such was the beginning of Australia’s oldest inland settlement. Building a path across the Blue Mountains presented a mighty challenge however in 1814, Governor Macquarie approved an offer by William Cox to build a road crossing the Blue Mountains, from the area known as Emu Plains (yes, hundreds of these flightless birds once roamed the area) to the Bathurst Plains. The first road to cross the Blue Mountains was 12 ft wide and 101 miles long and took around six months to construct using 5 freemen, 30 convict labourers and 8 soldiers as guards. If only shire councils were that speedy today! Governor Macquarie surveyed the finished road in April 1815 and by May of that same year the settlement of Bathurst had been proclaimed. 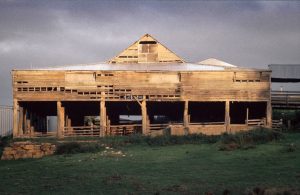 In 1818, Governor Macquarie stated in his diary:

“This morning I inspected 10 new settlers for Bathurst. I have agreed to grant each 50 acres of land, a servant, a cow, four bushels [141 litres] of wheat, an allotment in the new town, and to receive into the King’s Store at Bathurst all the wheat they can grow for the first 12 months.”

Bathurst was the site of the first gold discovery and where the first gold rush occurred in Australia. Naturally those riches attracted many prospectors as well as bushrangers, however settlers were also keen to take advantage of the fertile plains in the area. The local Wiradjuri groups resisted the colonists until the skirmishes of the early 1820s ended the open conflict and gradually the country was opened up to sheep and cropping. 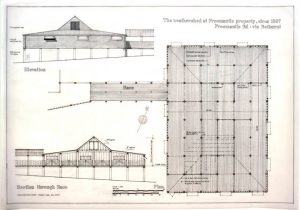 Freemantle Woolshed (also called the Weathershed), 32 kms northwest of Bathurst, dates from about 1897 and is heritage listed. The shed is an unusual design having been constructed to make use of the sloping terrain, while standard swinging gates and a race control the movement of sheep internally and from the covered space beneath. Whilst I could find little history on this woolshed the relatively recent sketches done by artist Graham Lupp.