“all men are equal in death”. The Australian War Memorial

The largest public display of Victoria Crosses in the world resides in the Hall of Valour in the Australian War memorial in Canberra. Here in the heart of the building directly below the Tomb of the Unknown Soldier are 82 individual displays for the holder of each of the 82 Crosses won out of 100 by Australians. A photograph, an excerpt from the citation that accompanied the award, and invariably additional medals are included in these simple but extraordinarily powerful tributes.

Charles Bean, Australia’s official World War One historian came up with the idea of a memorial while observing battles in France in 1916. A year later the Australian War Records Section was established so that documents relating to the war being fought at the time could be preserved. But Bean’s vision took some time to materialise. A failed architecture competition, limited funds and the effects of the Depression slowed planning and building and the structure was not officially opened until Remembrance Day 11th November 1941, by which time a second war was in progress, World War II. However it remains a grand building. Constructed in the shape of a Byzantine cross the War Memorial intrigues with its mix of Byzantine and Art Deco architecture, moving exhibits and sculpture garden. 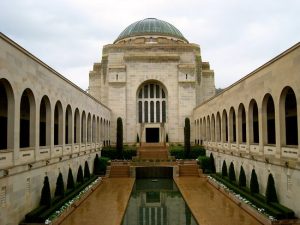 The Memorial’s Roll Of Honour includes all Australian servicemen and women killed in conflict or on peacekeeping operations.  It’s sobering to walk through this area with its red poppies carefully resting near name plaques, no mention of rank to place one person higher than another, for in death everyone is equal. Further on mosaic images of a sailor, a servicewoman, a soldier and an airman remind us of our armed forces and those who laid down their lives in the service of their country. The mosaics and stained glass are the work of the one-armed Australian muralist Napier Waller who lost his right arm at Bullecourt during World War I. Learning to write and create his works with his left arm, Waller finally completed his work in 1958. 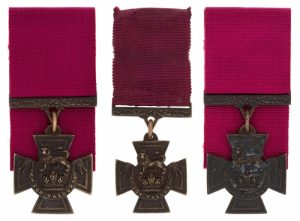 The Victoria Cross Gallery has all nine VCs awarded to Australians at Gallipoli: Alexander Burton, William Dunstan, John Hamilton, Albert Jacka, Leonard Keysor, Alfred Shout, William Symons, Hugo Throssell and Frederick Tubb. In 2006, Kerry Stokes purchased the VC medal awarded to Captain Shout for hand-to-hand combat at the Lone Pine trenches in Gallipoli, Turkey. Stokes paid a world-record price of A$1,000,000 at auction for the medal and asked that it be displayed in the Victoria Cross Gallery. You have to wonder what Shout would have made of all the fuss when you read the account below. 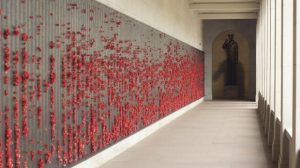 … Lieutenant Shout was a hero. Wounded himself several times, he kept picking up wounded men and carrying them out of the firing line. I saw him carry fully a dozen men away. Then another bullet struck him in the arm, and it fell useless by his side. Still he would not go to the rear. “I am here with you boys to the finish”, was the only reply he would make … A little later Lieutenant Shout was wounded again, and fell down. It was cruel to see him. He struggled and struggled until he got to his feet, refusing all entreaties to go to the rear. Then he staggered and fell and tried to rise again. At last some men seized him and carried him away, still protesting.