Banjo Patterson, the man who presented the Australian bushman as tough, independent, masculine and resourceful had similar traits to the characters he wrote about. A solicitor, journalist, war correspondent and fine horseman his sterling literary career gave us our most enduring poem and ballad, ‘Waltzing Matilda’. 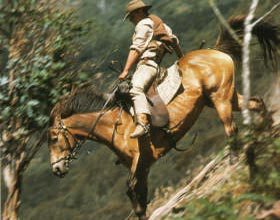 Andrew Barton ‘Banjo’ Paterson (below with pipe) was born on 17 February 1864 at Narrambla, New South Wales, the eldest of seven children. His father a grazier, Andrew Bogle Paterson and his wife Rose eventually lost their property due to financial hardship and Banjo’s father became a station manager. This theme of graziers facing difficulties would later become a major theme in Banjo’s writing life. Growing up in the districts of Orange and Yass he was eventually sent to Sydney to board with his grandmother while attending Sydney Grammar School. Emily Mary Barton was an accomplished poet and it was she who encouraged her grandson to read and write verse. She must have taught Banjo well for he was only twenty-one when his first work was published. The Bulletin, a journal with an Australian nationalist focus liked the poem he submitted that criticised the British war in Sudan. So did the Australian public. And from then on the Bulletin was keen to publish his works under the new poet’s pseudonym ‘The Banjo’, the name of one of Patterson’s favourite horses. 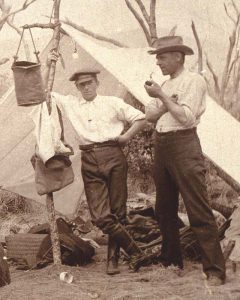 Banjo Patterson loved the outback. He romanticised the legendary courage and horsemanship of the bushman and the country in which they dwelt, although his often rose-tinted view of rural life drew criticism from his contemporaries who complained of his unrealistic point of view. Henry Lawson was one who didn’t agree with Banjo’s portrayal and the two men, although friends, often debated about their opposing views, with Lawson known for high-lighting the hardships of country life.

In 1895, Sydney booksellers Angus and Robertson published a collection of Paterson’s verse, under the title The Man from Snowy River and other verses and a celebrity was born. Over the next few years, Paterson travelled through the Northern Territory. It is said that everything he wrote about was published in newspapers and literary journals, such was the appetite for his work. He went on to publish many more works and collections, even becoming editor of the Sydney Evening News 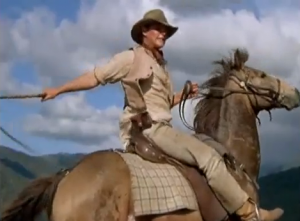 Paterson’s list of achievements include covering the Boer War as a special correspondent. His journalism career saw him visit China and England and on the outbreak of war he sailed with the AIF as a press representative. When he was unable to find employment as a correspondent he travelled to France driving ambulances for the Australian Voluntary hospital. He was not a man to sit idle eventually being commissioned in the AIF and sent to the Middle East. By now well-known for his horsemanship and leadership he was promoted to Major commanding the Australian Remount Squadron. Banjo’s love and respect for the Australian outback stayed with him through the years. Although he lived most of his life in Sydney his early bush beginnings left an indelible mark on him and in turn, on us.

Banjo Patterson 1864-1941. Paterson’s contribution to literature was recognised with the award of a C.B.E. in 1939