The 76th anniversary of the bombing of Darwin.

Today marks the anniversary of the largest single attack ever mounted by a foreign power on Australia – the Bombing of Darwin. On 19 February 1942, 242 Japanese aircraft, in two separate raids, attacked the town, the ships in Darwin’s harbour and the town’s two airfields. The Japanese hoped to prevent the Allies from stopping their invasion of Timor and Java and they were keen to continue their march south with the fall of Singapore having occurred four days earlier. 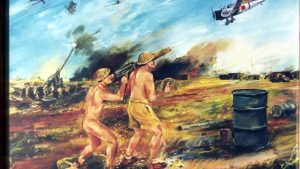 At the time Darwin was a town with a population of around 5,800 people. A small capital in a position that was strategically important during the second world war. Both the Royal Australian Navy (RAN) and Royal Australian Air Force (RAAF) had constructed bases there in the 1930s and like the rest of Australia probably never expected to be put to the test on home ground.

The Japanese raiders began to arrive over Darwin at 9:58 am. Using a combination of aircraft mounted automatic weapons and bombing they quickly hit their prime target, the harbour. HMAS Gunbar was the first ship to be attacked and as the town’s air raid sirens finally sounded the Japanese began thirty minutes of intense bombing. By the end, three warships and six merchant vessels had been sunk with damage to a further ten ships. 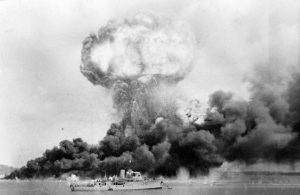 These fighters hurled more bombs at Darwin than what was dropped on Pearl Harbour. They knew what they were doing. The main attack came from aircraft flying from carriers which included four vessels who’d participated in the attack on Pearl Harbour. Two hours after the first assault, 54 land-based bombers flying from Ambon and the Celebes also struck, hitting both civilian and military airfields, the town’s army barracks and oil stores. All suffered serious damage.

Like the attack on Pearl harbour, the Japanese were fast and efficient. In response our ground-fire was intense but under such bombardment there was little chance of making a dent in the Japanese. Only around five of their aircraft were lost, with many more making it back to their respective bases with damage.

What’s interesting in digging through some of the research on the subject is the discrepancy in casualties. A commemorative plaque unveiled in Darwin in 2001 gives the total casualties at 292, while former Darwin Mayor (1921–1922) Jack Burton estimated 900 people were killed. Another witness, rescue worker, Harry Macredie, who pulled survivors and bodies from the harbour said, ‘we definitely estimate over 1,000’ were killed. 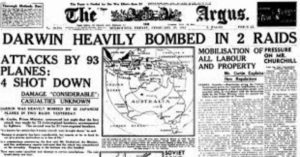 For years the myth of a cover-up existed. People believed that the government were loath to reveal the full extent of the damage inflicted on its most northern capital for fear of causing a panic. After the raids there was widespread looting and many people fled inland. As it turned out this wasn’t the last we would see of the Japanese. They returned to the north nearly seventy times between March 1942 and November 1943 bombing parts of the Territory as well as western Australia.

And those four Japanese aircraft carriers that participated in the Bombing of Darwin and the attack on Pearl Harbour. They were eventually sunk during the Battle of Midway in June 1942.

(This is a brief summation of events and the detail included is based on information freely provided over the internet.)