The finest shed in Australia.

The history of the wool industry in Australia is a story of resilience and passion, rebellion and power. One company that positioned itself as a heavyweight in the Merino industry early on was F.S Falkiner and Sons. Established in the 1880s, the business went on to build an empire of sheep stations some of which have endured through to the present day. One of their early holdings, Tuppal was purchased in 1891 near Tocumwal just north of the NSW and Victorian borders. The property was originally part of a larger parcel of land called the Deniliquin Run, selected by Benjamin Boyd in 1843. When Tuppal was purchased  the 40,000 hectare property cost F.S Falkiner and Sons approximately 392,000 pound. A pretty penny at the time. The acquisition included the 1860s built woolshed and added 124,000 head of sheep to their growing empire. 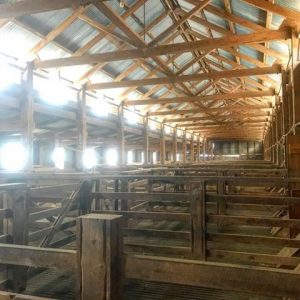 It seems that the station owner Francis Falkiner was innovative. Keen to ensure that the property was a leader in terms of the modernisation available at the time he spared no expense when it came to constructing a new woolshed.  The plans for the building cost 350 pounds.  Not an insubstantial amount at the time.

Once it was built the new 72-stand, completely mechanised Tuppal woolshed was noted by a Pastoralist Review journalist as ‘the finest shed in Australia’. Constructed of termite and flood resistant Murray Pine, Falkiner also included a part of the original 1860s woolshed, transferring the sweating pens from the old site to the new. 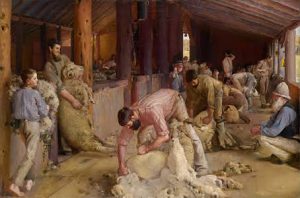 The Tuppal woolshed was chosen as the site for the 2010 re-enactment of Tom Robert’s ‘Shearing the rams.’ 15,000 people descended on the property over two days with 6000 sheep shorn. This large-scale project captured the action Tom Roberts portrayed so famously in his painting. The work was actually painted in a shearing shed (it no longer stands) on an outstation of the 24,000-hectare “Brocklesby” near Corowa in the Riverina region of NSW.

Built for efficiency, the handling process of the wool was minimised as each fleece only needed to be carried a maximum of 25 metres at any time.  It was also easy for overseers to supervise the action across the shearing shed floor due to the location of the stands. The boss in his cane-bottom chair, of Click-go-the-shears fame, would undoubtedly have been happy about that. Over the years the wool clip made its journey to Melbourne in a variety of ways. With the Murray River relatively near, at one point the clip was transported by paddle steamer to Echuca, and then by rail to Melbourne. Droughts however would have posed a problem and when the river was inaccessible the wool was moved by bullock team to the closest rail sliding. 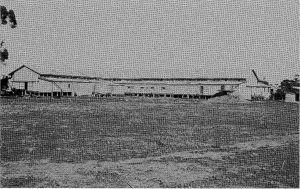 Over a 21-year period up until 1911, a total of 3 million sheep were shorn on the property. After its early success and following the Great War, the Tuppal property was broken up with land resumed by both the NSW Lands department and the Soldier Settlement Scheme. Today the North Tuppal area of the property is owned by Bruce Atkinson and his family.