Charles Kerry of Kerry & Co was a photographer at the turn of the century – 1900s. His photographic company was very popular capturing images from NSW’s rural areas at a time when regional Australia was growing quickly. He was also quick to see the needs of inland dwellers creating his ‘Squatter Service’ where he would take pictures of his clients and or businesses transforming them into postcards that could then be mailed to relatives. But his best-selling postcards were for everyone. His idealised scenes never noted a location which gave the images a broad, universal appeal. Which in turn turned him into the largest photographic business in Australia. 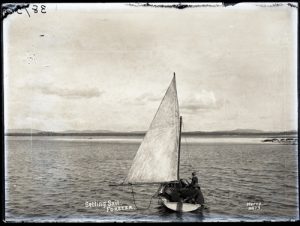 In the years leading up to federation Kerry had contributed greatly to the photographic profession transforming it from a novelty into an accepted form of creativity as well as a successful business. The Kerry and Co. team of roving photographers, equipped with the latest dry-plate technology – lighter and more portable than earlier methods, made use of the expanding rail network to photograph far-flung rural communities. 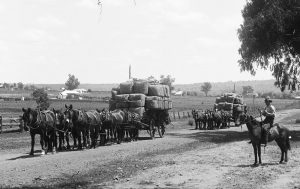 But it was his Squatter Service which he most enjoyed. With a childhood spent on a sheep station he personally photographed hundreds of rural properties, capturing moments perfectly through his own appreciation for the farmers he met on his travels. It would be fair to say that his images touched on the ideal of frontier farmers as heroic figures, something that his contemporaries such as painter Frederick McCubbin did so admirably.

But photography was not his only accomplishment. In August 1897, Kerry led a party to the 2228m summit of Mt Kosciuszko over five days, achieving the first-known winter ascent. He is also credited with pioneering snow sports in the area. He pushed for the construction of road and hotel facilities in the region, opened the area to winter tourism and popularised recreational skiing. 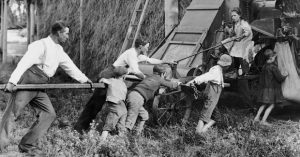 “Storing the Harvester” (pictured, above) showcases the Sunshine stripper harvester, an Australian invention that revolutionised the wheat industry. The picture also celebrates family, hard work and of course rural Australia.