Women were granted the right to vote in Australia in 1902 – we were far more forward thinking than some of our Northern hemisphere contemporaries, and the wave of feminism that followed continued through the first and second world war and onwards. The Great War increased independence for some, with women taking on the roles of men in factories, businesses and on properties while men were away at the front. And many women were reluctant to leave their new found freedom at the war’s end. And yet despite a growing contribution to the economy many women found their opinions still largely disregarded, the world male-dominated. There were few roles available to women other than that of wife, sister or daughter. Domestic duties remained the most common option, either in their own home, perhaps in a married siblings house or in paid employ. 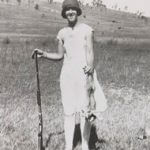 By the arrival of the 1920s, more and more women had thrown away the corsets which had literally been restraining them for years. They began adopting the more fluid, tubular style of the modern woman, the Flapper. Frowned on by established society for their wayward, partying antics, few people realised that these modern women were leading the push to go beyond the dictated expectations of society. They were no longer content to be pigeon-holed and, after the horrors and restrictions of the Great War, the sense of relief gave way to optimism.

The 1920s was a period of growth. We see the beginnings of the construction of the Sydney Harbour Bridge, increased mechanisation in factories and on farms and with motor vehicles finally becoming more affordable, transport options begin to change. And yet by the early 1930s a woman buying property, particularly a rural holding was cause for interest. It is a telling example of attitudes towards women at the time. 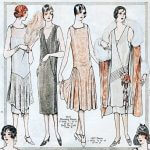 Interestingly, one lady placed in the spotlight at the time was a Mrs Adelaide Walker. In 1933 the Tasmanian Examiner ran an article stating that this woman had purchased a pastoral property in western Queensland. The fact that this buying of land by a woman warranted a headline in an island state thousands of miles away signified the importance and the uniqueness of the event. The world had just staggered through the great stock market crash of 1929 and was in the grip of a devastating recession, and yet here was a woman laying claim to a remote rural property. But a headline? Surely it wasn’t that big a deal, or was it? Married at the time, Mrs Walker turns up again in a mid 1930s census where her occupation is noted, ‘home duties’. The standard of the day. It is more than likely that Mrs Walker’s husband used his wife as a holding name for the new land purchase, a common practice even today where state regulatory guidelines keep a watchful eye on rural land accumulation (The resumptions of the 1880s where large stations were carved up, following the concerns of those ruling the colonies that some pastoralists had grown too large and powerful for their own good, still weighed heavily on the bureaucracy in the 1960s).

Regardless of whether it was just a simple business decision all those years ago, Mrs Walker made the news. If she heard of her notoriety I like to think that she may have laughed at the simpleminded readers the Tasmanian Examiner were at due pains to entertain. Either way she had her land. The property was in her name. Roughly fifty years earlier women were still fighting for the right to own and dispose of property. Thirty-two years earlier Miles Franklin stunned the public with ‘My Brilliant Career’, imagine the audacity of a woman choosing freedom and art over man and duty…

Taking a moment in time and using it as a premise for a novel is one thing, being able to place that true event within the context of our own history makes for some fascinating research. It also allows the opportunity to explore the restrictions of time, gender and the society in which women lived in the late 1920s and early 1930s in rural Australia. An Uncommon Woman.