This year I’ve thoroughly enjoyed remembering some of Australia’s most influential pastoral artists, painters who have left a significant imprint on Australian history through their depictions and reflections of rural life. To wrap up this series of blog posts I’m going to take a look at one final artist, well-known painter Russell Drysdale. 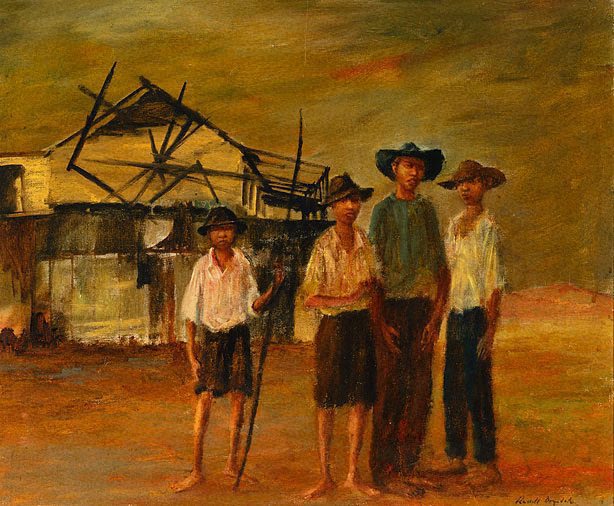 Above – Four Boys in Cooktown. Below – Sunday Evening

Russell Drysdale was born in England, but immigrated to Australia with his family at the age of 11. His family settled in Victoria, where he later worked as a jackaroo on his Uncles property, and oversaw his family’s farm in Boxwood Park. Growing up in a pastoralist family, one would think that Russell Drysdale was destined to work on the land, but a chance encounter completely changed the trajectory of his life.

In 1929 Russell Drysdale was diagnosed with a detached retina, which would eventually see him turn blind in one eye. He began to draw to exercise his sight, and while in hospital for an operation his surgeon showed his drawings to artist Sir Daryl Lindsay. Sir Lindsay recommended he study under well-known modernist artist and teacher George Bell, and this is where Russell Drysdale’s journey as an artist began. 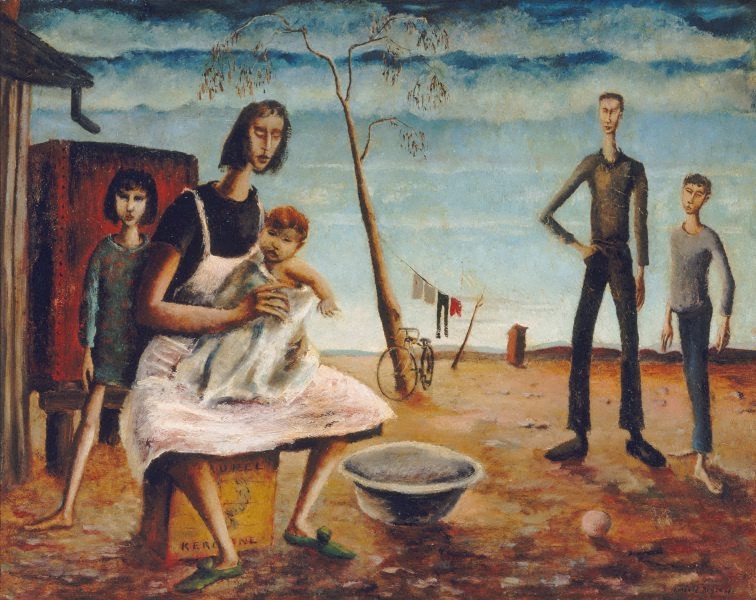 In mid 1940 Russell Drysdale moved to Sydney. Here he embraced a real enthusiasm for painting the Australian outback and its people, with his work assuming a distinctively Australian disposition, capturing the bare landscapes and vast geography of the bush.

In contrast to other paintings of the time, that portrayed flourishing pastoral scenes, a lot of Russell Drysdale’s paintings echoed harshness, remoteness and isolation. In 1944 his big break came when The Sydney Morning Herald commissioned him to travel to rural NSW, where he painted a series on the drought-ravaged country, based upon the derelict gold-mining town of Hill End. This is also when he painting Sofala, a town near Hill End, which won him the Wynne Prize for Landscape in 1947. After this, Russell Drysdale rapidly became a household name in Australia. 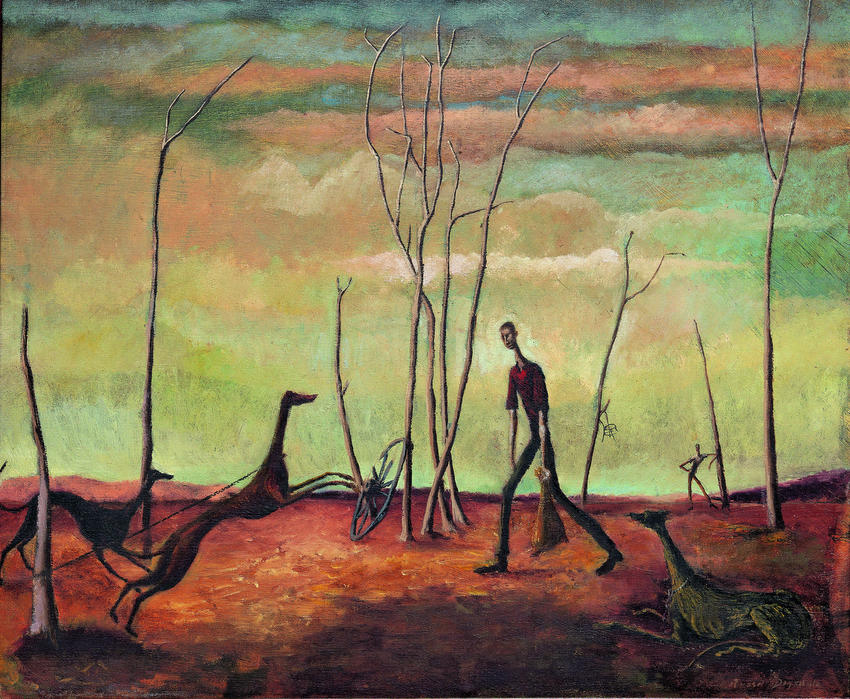 Man Feeding His Dogs, is a melancholy image of a stretched out figure feeding his greyhounds, set upon an eerie landscape with bare leafless trees, red earth and cloudy skies. It has a moodiness and aura that expressively captures the harshness of the outback, the heat and dryness, its textures and ochre tones. Drysdale evokes a sense of awe through his expressionism and surrealism, and elongated haunting characters.

After a successful international and national career as an artist, Russell Drysdale was officially knighted in 1980, and awarded the Companion of the Order of Australia. His art adorns galleries across the country and his representations of the Australian outback will always be a part of Australian history. He is yet another painter who has significantly helped Australian art to chisel out a niche of its own, with a distinct character that captures the essence of this great land of ours.