‘Where ladies went, men would follow’ – The Melbourne Cup

In order to attract a bigger crowd to the first Melbourne Cup in 1861, the secretary of the Victorian Racing Club, Robert Bagot decided to issue members with two ladies tickets, calculating that ‘where ladies went, men would follow’. The marketing ploy worked with a crowd of 4,000 men and women watching the race, although it was said that the numbers were down after news reached Melbourne of the death of the explorers Burke and Wills a few days earlier. 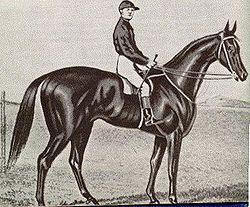 Seventeen horses contested the first Melbourne Cup with the mighty Archer winning the modest prize of 710 gold sovereigns and a hand-beaten gold watch. This first race was not without excitement and tragedy. One horse bolted before the start, while three other horses fell during the race, two of which died. Archer, a Sydney “outsider”, won by six lengths and the Victorian bookies lost out ‘big’. Archer took a lot of money away from Melbourne, which created interstate rivalry but also added to the excitement of the Cup.

The race that stops a nation has created some wonderful equine stars.

Phar Lap, the most famous horse in the world of his day, won the 1930 Melbourne Cup and was the shortest priced favourite in the history of the race. He had to be hidden away at Geelong before the cup after an attempt was made to shoot him and only emerged an hour before the race.

Black Caviar although only winning the Cup once was proclaimed the greatest race-horse in the world before her retirement in 2011 while the unforgettable Makybe Diva made history in 2005 with a third Cup win. On the day, Trainer Lee Freedman said, ‘Go and find the youngest child on the course, because that’s the only person here who will have a chance of seeing this happen again in their lifetime’. 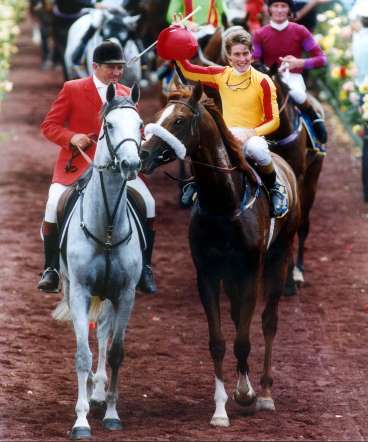 And the fastest horse of all time? That record goes to 1990 winner Kingston Rule(at left). It’s an impressive record considering the stallion’s speed has not been beaten in nearly 26 years…. Maybe today.

And the Cup itself. Up until 1914 the Melbourne Cup trophy was manufactured in England. Creation rights then reverted to Australia with the current three-handled loving cup design first made in 1919. It’s a design that is in keeping with the prestige of the race, and I wonder if the organisers back then ever gave thought to the fact that it would become the iconic Melbourne Cup still presented today.

A new trophy is struck each year and becomes the property of the winning owner. In the event of a dead heat a second cup is on hand. The present trophy is made from 44 pieces of gold metal hand beaten for over 200 hours. You can see the small hammer imprints inside. Today the trophy contains 1.65 kg of 18-carat gold and is valued at $175,000.

Take away the frocks, punters, marketing and endorsements and concentrate instead on the miraculous horses at the heart of The Cup, the richest Two-mile handicap race in the world.