The getting of a bush education.

Schooling the bush way. The pushbike, car, motorbike or quadbike ride to the school bus pickup point along a dirt road. Or perhaps a short walk. The car-pooling to a local school. The switching on of the School of the Air or the studying of lessons under the scrutiny of a governess or parent via correspondence lessons received through the mail. Bush education comes in many forms. And while isolation is no longer the barrier it once was, access to materials and resources on a par with urban schools can often be lagging in years or non-existent. 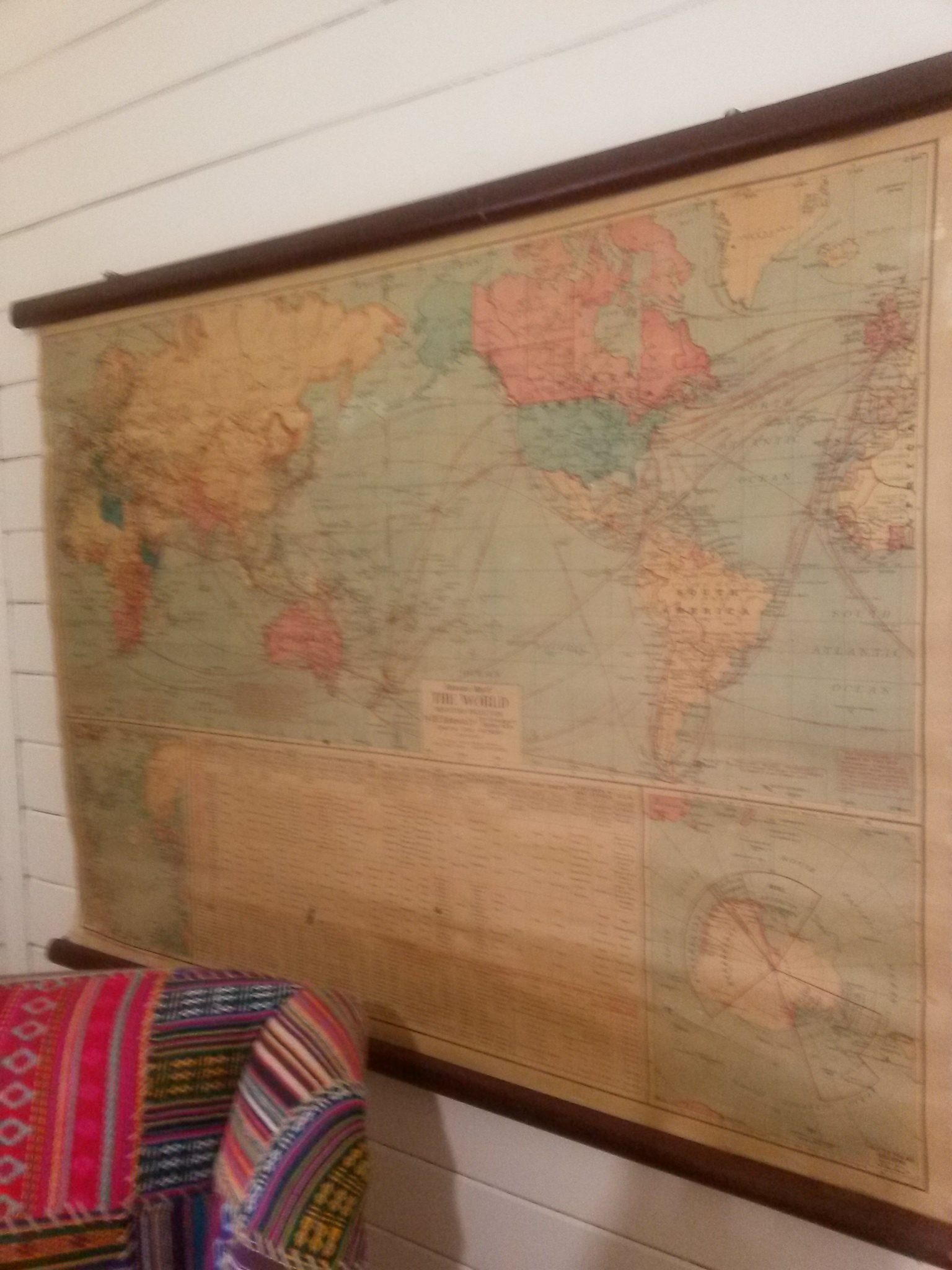 I was a child of both home schooling and our local public school, before being sent to boarding school. Mum taught myself and my siblings around the dining room table as by that time the schoolhouse on our property had been converted into extra accommodation for jackeroos (the world map pictured left, hung in the school-house up until the 1940s). The last time the building had been used was in the mid-1940s when my father and his two sisters were schooled there by a series of governesses. And I mean a series. Around twelve young women tried their best to educate that generation and apparently only one of those women left due to the isolation. The phrase, ‘little buggers’ comes to mind. And so it was back in the car and the forty mile drive to the nearest railway siding at Garah to drop off the governess who’d given up trying to control her classroom. Eventually my father and aunts were packed off to boarding school in Sydney.

My brothers and sister and I tried our best to disrupt lessons with mum, especially with a busy homestead buzzing around us. We itched to be outdoors. Crashing go-carts, fishing for yabbies or vying to be the one picked to go out with Dad in the old blue utility. Paddock bashing was the phrase we overheard and clung to. Better still if the horses were in the yards. Maybe one of the jackeroos would take us out for a ride.

Our attempts at escape were glorious but fleeting. Mum was fast. Much faster than us. And she had a sixth sense when it came to her children’s attempts at wrangling out of lessons – crawling under the large oak table, dashing out a door, going to the toilet and not returning. She was there, firmly but lovingly, steering us back to our lessons. We quickly understood that the more dedicated we were in school hours the more likely we were to receive an early mark in the afternoon. Secondly, we weren’t really missing out on everything. Sure we had our moments. And occasionally the wooden spoon was waved about and made contact, but we were learning in the heart of a busy environment and we soon understood that everyone had a part to play.

Mum taught us, cleaned, cooked for her family, jackeroos and an often continual stream of visitors, worked outside when required and generally kept the homestead running smoothly.  Next door in our kitchen, the two-way radio was a constant reminder of what was happening on the property during the working week. The men chatting over the air as they discussed the movement of stock, the tasks of the day and as always, the importance of the weather. There were jackeroos coming and going – for smoko, for lunch and in search of Dad. And of course Dad came in regularly for meals, regaling us with tales from the day and quite a few from his past. 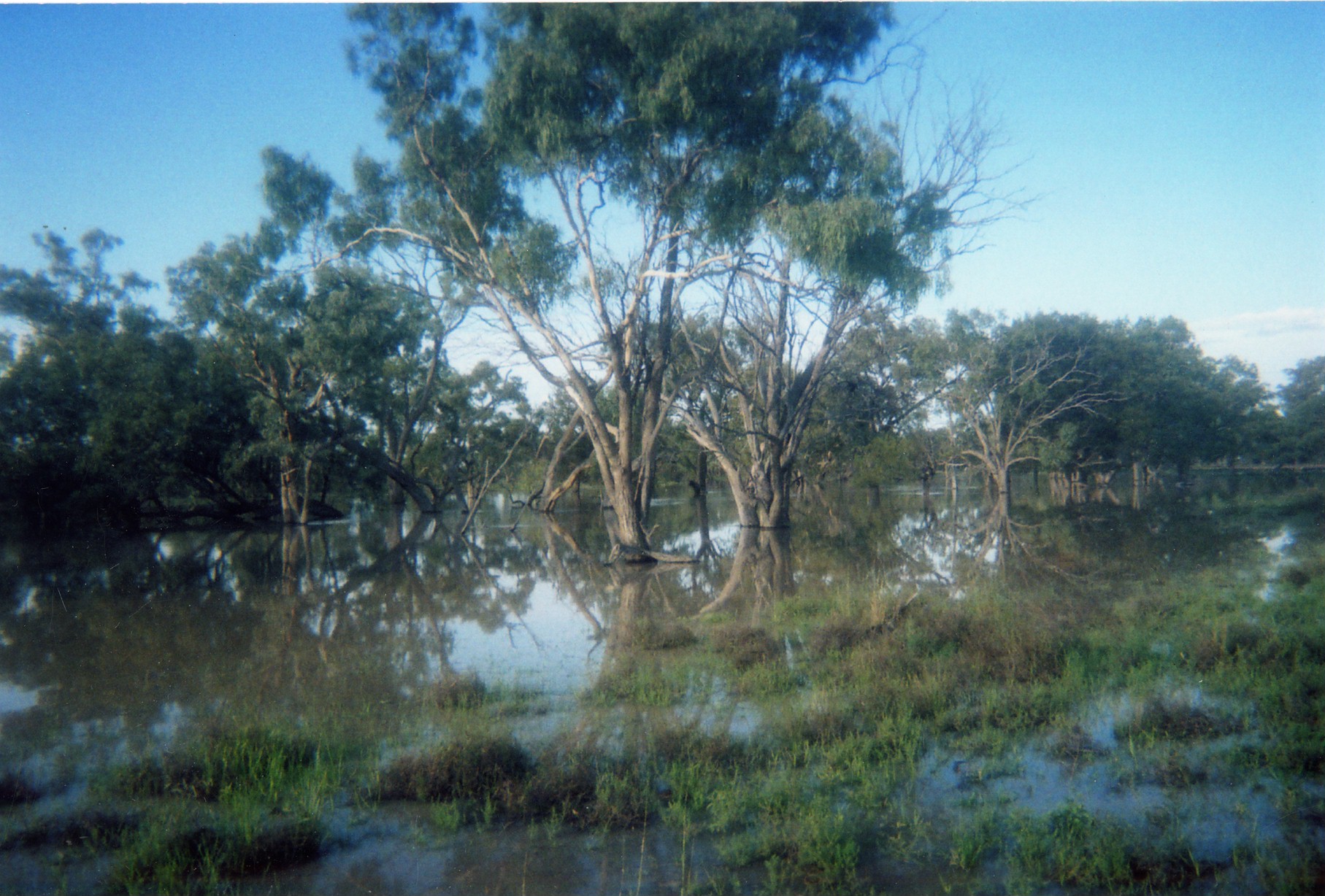 We worked on station pastoral hours. A seven-thirty am start. A lunch hour starting at 12 noon, with the day finishing around 5.30 pm or there abouts, depending on what was on the beyond the back gate. A friend once scoffed about our adherence to the pastoral traditions, which were religiously retained up until the mid-1990s when our increased foray into cropping meant that at times, the tractor jockeys worked shifts in eighteen hour days. It seemed normal to me. The property had always been run according to pastoral conditions which was a link to a time when we were solely dependent on wool for our income and our rural interests included a station in western NSW which was equal in size to Tahiti. So why not? And it was a system that was perfect for kids being educated at home. There’s a lot to be said for routine.

When it was decided that we should go to our local public school for a year or so, a transitional stage that was to allow us to get use to mixing with more children before we too began the rickety overnight train ride to Sydney boarding schools on the North West Mail (or snail as we called it), we finally realised how lucky we were to have been home-schooled. But we made the best of things. On being told that we could ride our motorbikes a couple of kilometres to the school bus pickup point, we excitedly realised that bike races along the dirt road would top and tail our school days.