Hans Heysen: When we envisage the Australian bush, a vision of the iconic gum tree instantly comes to mind. Throughout history many artists have painted these quintessentially Australian trees, but I don’t believe anyone has mastered it quite as meticulously as Australian landscape artist Hans Heysen. He brought these soaring pillars to life with watercolour and oil, deciphering between each species of gum and detailing each imperfection with an almost analytical approach.

As an artist, Hans Heysen showed promise from a young age, embracing the Australian way of life after migrating from Germany with his family in 1884 at the age of 7. Hans enrolled at the James Ashton Norwood School of Art and bought his first set of paints at 14. He would set off on adventures throughout the Adelaide Hills with his paints and stool, favouring to paint in the Onkaparinga Valley near Hahndorf and Grunthal. It wasn’t too long before he was travelling through Europe, lucky enough to gain a sponsorship to study in Paris at the Academie Julian and Colarossi’s Academy. He painted in Italy, Holland and Scotland, as well as Germany, and then returned home to paint the Australian landscape once again. 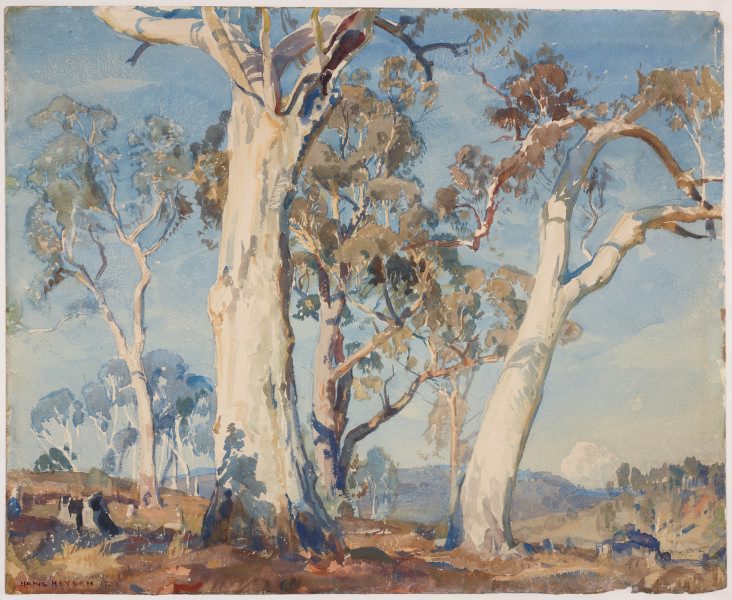 Although he was most famous for his paintings that included Australia’s gum trees, he also captured people toiling on the land alongside livestock, as well as the ebbs and flows of the Australian landscape, including drought. His 1916-21 painting entitled ‘Drought Sheep’ was a little different to his other works. It shows a mob of sheep taking off down a stark and arid track, thirsty and anxious. You can almost feel the intensity in this painting, imagining the dry, dusty air and the pulsing heat as the mob pushes their way down the outback track.
Heysen later travelled to the Flinders Ranges for a change of scenery, painting the intense colours, light and the shadows that fell upon this very bare and different landscape. Many of his artworks came from the Flinders and this is where he created some of his most famous works.
Hans Heysen’s paintings appeared in numerous galleries and exhibitions throughout Australia, with his most predominant shows in Melbourne. After his second one-man exhibition in Melbourne, he was able to buy ‘The Cedars’, a 60-hectare property in the Hahndorf countryside. This was his little slice of heaven, where he built a studio and continued to paint surrounded by his wife and family of 8 children. Settled at ‘The Cedars’, Hans Heysen continued to paint and also mentored young artists moving through the artistic ranks. He was a board member of the National Gallery of South Australia and was knighted in 1959. His passion for the Australian environment was obvious during his fight to preserve the gum trees that surrounded his property at Hahndorf. He fought to save the great red and white gums and spoke actively about the growing damage the Australian bush was rapidly being subjected to. Hans Heysen passed away in 1968, but ‘The Cedars’ is his lasting legacy. It’s currently a museum, open to the public to showcase his artwork and the grounds of the property. However, in April this year it was announced that government funding had The Cedars on track to become a MONA style cultural centre and a continued reminder of Hans Heysen’s contribution to Australian art.