Aboriginal scar trees. You may well have driven, rode or hiked past one of these woody plants without even noticing. These trees are different from other tree scars caused by naturally occurring phenomenon such as bush fires and lightning as they’re man-made and invariably many decades old.

Once extremely common, Aboriginal scar trees have been lost through felling, bush fires, land clearing for agriculture or urban development, and maybe even for museum collections. Certainly I’ve seen some fine examples that have been uprooted and transported to controlled climate environments for public consumption. And whilst we might bemoan the fact that some of these trees have been moved from their traditional sites, it does allow us to see some fine examples of ancient bushcraft techniques and in doing so preserves them from the possibility of man-made or natural destruction. 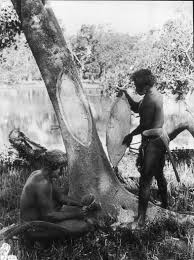 The art of using trees to create everyday materials and tools such as shelters, canoes, containers and water carriers, or to mark a living tree for spiritual and historical significance is an age-old practice and just one example of how Australia’s First People lived in unity on their traditional lands, applying environmental bush craft and resourcefulness to make essential commonplace tools and materials from natural materials.

Only recently a rare grey box eucalypt, believed to date to the 19th Century was discovered on a farm in New South Wales’ Hunter Valley near the town of Vacy. The tree has two large scars in it where it is thought indigenous inhabitants in the Patterson River area cut out two canoes over one hundred years ago. Most probably to manoeuvre through flood waters.

As our lives become increasingly urbanised I think it’s worth pausing and thinking about our history and considering what treasures from our past can be found in the Australian bush.