In 1837, forty-nine years after the arrival of the white man in Australia the suggestion was made that Australia was a country sorely in need of camels. Considering the extent of Western and Central Australia it turned out to be an excellent idea. The first record of imported camels is in 1840, when the lone survivor of a small herd of camels from the Canary Islands made it ashore. But Harry (as the camel was called) while part of an expedition in the Flinders Ranges shifted positions while his owner was at his side. The man in question was holding his loaded firearm at the exact instant Harry moved, the rifle discharged and a few weeks later the man died. Unfortunately, Harry was executed for his part in the accident.

Despite Harry’s demise, which might well have signalled an end to further camel importation, the benefit of these ships of the desert compared to horses was quickly acknowledged.  And so they arrived, to be handled and cared for by Muslim cameleers who arrived from far flung places such as Turkey, Egypt and northern India. These men became known as Afghans or ghans even though few came from that region, and they and their charges are credited with opening up Australia’s inland. They took part in numerous expeditions, were invaluable in the construction of railways – the line from Port Augusta to Alice Springs soon became known as the Ghan Line, and supplied the most basic of services to remote areas, isolated stations, bush towns and telegraph station providing the delivery of mail and supplies. 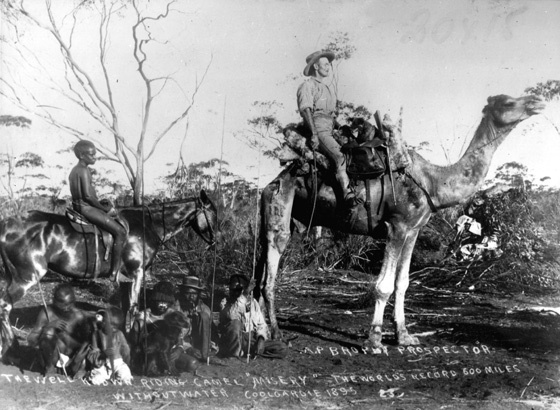 One of our most well-known camels even had a statue erected in his honour. Misery was owned by gold prospector A. P. Brophy. Having ventured far afield Brophy found himself in the hot, dry year of 1895 in the waterless country east of the gold mining town of Coolgardie in western Australia and had little choice when it came to returning to the town. He walked Misery 600 miles back to civilisation, unable during the entire journey to give the camel a drink. The distance covered and Misery’s fortitude was instantly declared a record and word slowly spread of the camel’s valour. Today a modernistic monument stands to mark Misery’s achievement and the tilt of Brophy’s head in the photograph above shows the man’s pride in owning such an animal.