The history of horses in Australia could fill volumes. From our first settlers, to the mounts of the Light Horse to Phar Lap, we are a culture that loves our nags, even if it just means having a flutter once a year on the Melbourne Cup. But the love affair that grew out of a basic need for transport and later, gambling created a population of wild horses that today is thought to range around one million.

After the arrival of horses with the First Fleet in 1788, they were then later imported for farming and transport, however the numbers kept were low. It was only when horse racing became popular that their population skyrocketed, from around 200 head by the year 1800 to 3,500 twenty years later. These weren’t your standard stock horses or Sunday rides either. Imported racing thoroughbreds from England formed the basis of these numbers with the long sea journey from places like England, Europe and Asia quickly weeding out the weak from the strong. By the 1850s horse numbers had grown to around 160,000, mainly through natural increase. And the animals were strong, the offspring of the healthy horses that had survived the trip across the seas. 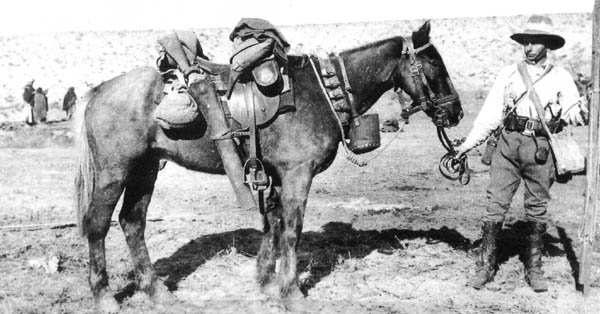 (ABOVE: Corporal Austin Edwards, his horse Taffy, and all equipment. WW1. Corporal Edwards was seriously wounded at the Battle of Romani. During the battle, Taffy stood still for his wounded rider to remount and escape.)

It was inevitable that some horses would escape or be left to the wilds of an early untamed, Australia. As the pastoral industry grew and horses became vital for livestock work, a lack of fences led to losses. Some animals were also simply released into the bush, perhaps by new settlers who unable to make a go of their holdings in more remote areas, simply walked off the land. Gradually the replacement of horses by machines changed Australia’s culture from a country dependent on leather manufacturers for saddles and boots – people either walked, rode or drove buggies, drays or sulkies, to a more mechanised society.

They are a part of our heritage. That mystical romantic link to the Man from Snowy River made real to us by folklore and the likes of Banjo Patterson and Elyne Mitchell of The Silver Brumby fame. They also carry the bloodlines of our history. From our early settlers and the opening up of our lands to those horses that carried our Light Horse Brigade in the last great cavalry charge at Beersheba in 1917. Today Australia’s national wild herd is thought to number 1 million with the majority of them to be found in tropical Queensland and the Northern Territory, however brumbies can be found in every state of Australia.

“(November 16th, 1917) The operations had now continued for 17 days practically without cessation, and a rest was absolutely necessary especially for the horses. Cavalry Division had covered nearly 170 miles … and their horses had been watered on an average of once in every 36 hours …. The majority of horses in the Corps were Walers and there is no doubt that these hardy Australian horses make the finest cavalry mounts in the world “