Hill End. An abandoned goldrush town. Home to the ghosts of pan-shackled miners, some who won big and others who lost. In 1872 it was NSW’s largest inland settlement. Incorrectly named Forbes before Hill End was chosen and the town gazetted, it is a place that carries the memory of the wily antics of the estimated ten thousand miners who descended on the town during the height of the gold rush. Since the 1940s, rich veins and golden nuggets have appeared in other forms, for smeared within Hill End’s seams is the water-coloured and oily world of painters. 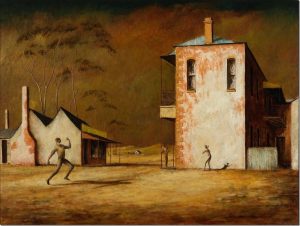 Indeed it’s the artists that have become linked to this historic village and for which it is now famously known. In the late 1940s a young Russell Drysdale and Donald Friend, saw the huge potential in painting at Hill End, mainly because of the eerie quality of this ghost town and I would also imagine because of the quality of the light. Empty, ancient structures, soaring trees and unadulterated country light, an artist’s palette. 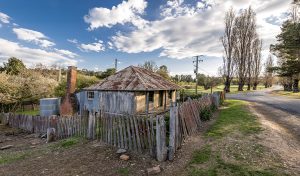 In 1947 Drysdale and Friend moved to the area. Margaret Olley, Jeffery Smart, Brett Whiteley and John Olsen followed. But what of the village before it morphed into Australia’s version of Paris’s Montmartre? These artists came for the buildings and sites like Beyers Cottage. Louis Beyers, a pioneering Polish miner purchased land in Hill End for £4 on 25th May 1865, building a cottage in the late 1860s. A miner’s dwelling relic, it is a great example of the wattle and daub construction. Beyers was involved in the famous Holtermann Specimen discovery – the largest gold nugget found at the time, and later became the mayor of Hill End and is renowned for developing the local area. Within every painting completed at Hill End are a myriad, fascinating lives.