Irish born Captain Moonlight (Andrew Scott) might have trained as an engineer in London but he would eventually hold his dying lover in his arms thousands of nautical miles south in Australia. In 1861 his family moved to New Zealand with the hope of finding gold. The Maori Wars intervened and Scott enlisting as an officer was shot in both legs. When he was court-marshalled for shirking his duty after a long convalescence he stated that he objected to the slaughtering of women and children which had occurred at the battle of Orakau.

Travelling to Melbourne he decided to follow his father as an Anglican Minister becoming lay reader at Bacchus Marsh, but his call to God was short-lived. Sent to the gold mining town of Mount Egerton, in May 1869 Scott was accused of disguising himself and forcing bank agent, Ludwig Bruun to open the safe. Bruun said he was robbed by a fantastic black-crepe masked figure who forced him to sign a note absolving him of any role in the crime, Scott signed the note, Captain Moonlite. A legend was born. 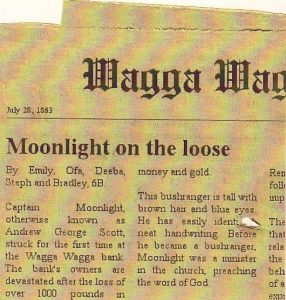 Although Scott was blamed for the robbery, initially there was not enough proof to convict him until he sold 120 ounces of gold at the Sydney Mint. Gold which was very similar in quality to that stolen in Victoria. Goaled for 15 months for another crime – obtaining money under false pretences near Newcastle, Scott was finally arrested for the gold heist. It was while serving two-thirds of a ten-year term at Pentridge that Scott met James Nesbitt.

Nesbitt helped launch Captain Moonlite as a celebrity speaker after their release, but the newspapers and the authorities harassed him continually, blaming him for numerous crimes in the colony. It was soon after this that Captain Moonlite began bushranging with Nesbitt and four other young men. Often mistaken for the Kelly gang, Captain Moonlite was eager to take advantage of offers of food and was quick to steal guns from unsuspecting homesteads.  They gang made their mark in the southern district of NSW. The robing of all the residents of Wantabadgery, about 28 miles from Gundagai in November 1879 making them infamous. Next they terrorised the family and staff at Wantabadgery Station near Wagga Wagga before targeting the Australian Arms Hotel. Along the way they took prisoners from properties, their hostages totalling 25. 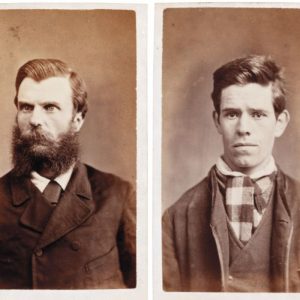 Troopers were bound to catch up with Moonlite and his gang. The police cornered them at a farmhouse and when Nesbitt was killed trying to lead the police away from Captain Moonlite it’s said that the Captain became distracted and that it was this that led to his eventual capture.  According to newspaper reports at the time, Captain Moonlite openly wept at the loss of his dearest and closest companion. As Nesbitt lay dying, ‘his leader wept over him like a child, laid his head upon his breast, and kissed him passionately’. 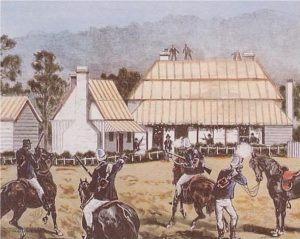 During the gang’s trial, in one of his last acts of loyalty Captain Moonlite succeeded in speaking up for three of his gang members and they were granted mercy. However there was no such reprieve for him. Hanged along with one other gang member named Rogan, Captain Moonlite went to the rope wearing a ring made from a lock of Nesbitt’s hair. His final request;

“My dying wish is to be buried beside my beloved James Nesbitt, the man with whom I was united by every tie which could bind human friendship, we were one in hopes, in heart and soul and this unity lasted until he died in my arms.” ( A queer bushranger: The tale of Captain Moonlite, by Jeff Sparrow, in The Monthly; published Nov. 2015)

While Captain Moonlite’s burial request was not initially granted, in January 1995 his remains were exhumed from Rookwood Cemetery in Sydney and reinterred at Gundagai next to Nesbitt’s grave. Handwritten letters written by Scott to Nesbitt and held by the Archives Office of NSW profess his love for his friend and show that it was a romantic attachment, but whether their love went beyond words is mere speculation.