A bushman with his dog

A bushman with his dog and horse outside a humpy. This picture is thought to have been taken in the Hughenden district, QLD, around 1910-1920. By the looks of it it’s made from canvas and branches and you can see cooking utensils near the entrance. A humpy (or gunyah) was traditionally used by Aboriginals as a temporary shelter and white settlers were quick to see the benefit of this type of dwelling. Often a standing tree was the main support which led to the name of lean-to also being used. 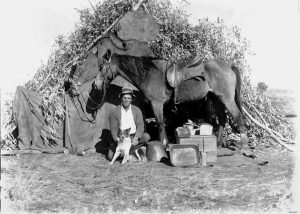 Branches and bark were the basis of these dwellings until something more permanent was erected, if needed. Later on anything that was lying about was used to build shelter. Canvas, sheets of corrugated iron and flattened drums being particularly favoured. The word humpy comes from the Jagera language (a Murri people from Coorparoo in Brisbane); other language groups would have different names for the structure. In South Australia, such a shelter is known as a “wurley” also spelled wurlie.