Floods, murder and the art of not getting white-anted

Floods, murder and the art of not getting white-anted features in the early years of Milly Milly Station, located 200km west of Meekatharra. A sketchy timeline suggests that a simple hut built by the O’Gradys in the later part of the 1870s became the heart of Milly Milly, a 1.5-million-acre property that runs beside the Murchison and Wooramel Rivers. The O’Gradys went on to build a large stone homestead with a thatched roof, but when the house was destroyed by floodwater in 1884 another home was erected, along with new outbuildings.

In the late 1880s the holding was leased to James Aitken, who set up the property to run sheep, cattle and horses. At his death it went to his brother-in-law Mr McKellar, and somewhere in between 1905 and 1907 it was passed on to the Mulcahy brothers, well-known hotel owners in WA. During this period drought struck the property as well as a murder mystery when in 1893 it became the scene of a crime. An Aboriginal woman was killed as she walked with a worker to a neighbouring property, but in the end no one was convicted of her murder. 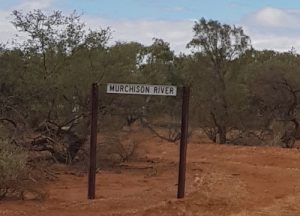 1910 saw another deluge and once again a massive building project was underway to replace the flood-damaged buildings. The third homestead erected at Milly Milly became a showpiece in the greater district with locally sourced sandstone and the use of cement conquering the destructive white-ants that plagued the northern portion of the state. Such was its quality that the upgraded homestead caught the attention of the Western Mail newspaper.

‘The rooms are lofty and so well arranged that they open on a broad passage 47ft long and also on a verandah 10ft broad which runs right round the house. The kitchen, also of sandstone … and water is laid on everywhere from two 7 000-gallon tanks continuously fed by windmills. There are few better residences of its class anywhere than Milly Milly homestead’.

The tranquility was short-lived. The holding which grew wool, up to 480 bales of a year, also became the scene of another murder when in 1912 the station’s cook was arrested for poisoning the property’s accountant with a whiskey bottle spiked with arsenic. A not uncommon method in the bush based on the stories I’ve heard. Such information is anecdotal however it was a nifty way of doing away with someone with evidence hard to trace and arsenic readily available in property store-rooms.

The Mulcahy brothers eventually died and new owners took over the holding, but that grand homestead still stands a testament to those early pioneers.

(NB. This is not a full history of the property)