There’s an art in making billy-tea and when properly made the average bushman will tell you that it’s ‘the drink’, far surpassing the kitchen-made variety. The billy or billycan is only at its best when it’s stained and blackened from usage. The sundowners – those restless souls of the past who would arrive at a sheep station at dusk seeking work but in reality more hopeful of food and shelter, believed the billy was best when it had some ‘experience’. Much like a roasting tray, years of use seasons the can. The billy used to be an essential part of every bushman’s equipment. Waltzing Matilda sat and watched his billy boil and Henry Lawson must have guessed his collection of short stories catchily entitled, While the billy boils, would be popular. It was, particularly as one of the stories featured was the eventual classic, The Drover’s Wife. 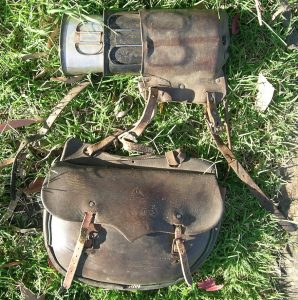 Up until the late 1990s we still boiled a billy on our property, on a campfire when out mustering. The old-timers were right. Nothing beats black tea, a dollop of sugar and a corned meat and pickle sandwich at smoko. It’s said that the billy was baptised into Australian folklore by miners on the mid-1800s Victorian goldfields of Australia. There was a shortage of food on the diggings and the government set about importing preserved supplies such as tinned meats, stews and soups. Canned meats from France under the brand ‘Bouilli’ (boiled meat) became popular with the diggers, however pronouncing the name proved more difficult. And so the meaty mixtures were soon dubbed Billy. Whether the diggers can take full credit however will never be known for there is some thought that the name could refer to the aboriginal word for water, billa, as in billabong. 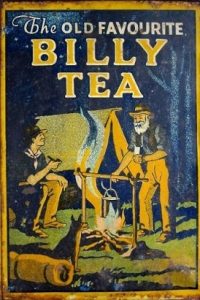 Always ready to adapt any material at the time the billy cans were soon used for water and later with the addition of a handle became an essential item. Eventually the billycan would be manufactured and a mainstay of the outback was born. The original lid-less billycan is different to the quart pot. The pot is wider at the bottom so it’s steadier with the advantage of exposing more heat to the sides. A folding handle allows it to be pushed into a fire and a mug fits into the top. Plus it has a lid. There were various sizes available by the time the 1900s began, depending on whether you wanted to carry water from the creek to the camp fire, boil a leg of mutton or a cup of tea. And they’re still on the market proving once again that invention born of need lasts forever. 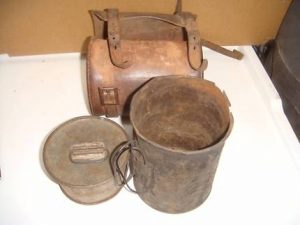 A story tells of a stone being dropped into a billycan and the owner wondering why his billy took longer to boil than his mates. I’ve never tested this theory out but in our homestead kitchen in the early 1930s any tough old hens, boilers – as they were/are still known, that were past breeding and only good for eating were slow cooked on the wood-burning aga stove with the addition of a large stone so that the meat cooked slowly and was reasonably tender. There’s always a grain of truth in any bush story.