The 143-year-old Kinchega Woolshed built from corrugated iron and River Red Gum, is one of Australia’s most historic woolsheds. Here visionary pioneers and ill-fated explorers form part of history on ancient land. The Kinchega property is situated just over 1100 km north-west of Sydney, south-east of Broken Hill. The antiquity of the surrounding land goes back beyond the woolshed’s birth in 1875, to when The River People, the Paakantji Aboriginal tribes roamed the country at least 35,000 years ago. Adapting their lifestyles throughout the droughts and the rains, hunting for perch and fresh water yabbies in the Darling River, they lived off the river and the land until European settlers moved in. With these new land holders came disease and conflict and ultimately movement to camps, which led to these indigenous landholders losing their ties with the land. 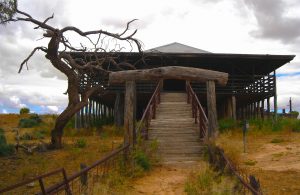 In 1855 the plot of land that forms Kinchega (originally known as Minindee) came up for tender. The property changed hands many times until in 1870 when Hubert B Hughes took over. Hughes was a visionary. He experimented with bores and tanks increasing watering points and his livestock carrying capacity for the hardy Merino sheep he introduced. Telephone lines were installed. He even had his own steamers built in the UK, which were shipped over to transport the wool-clip down river. 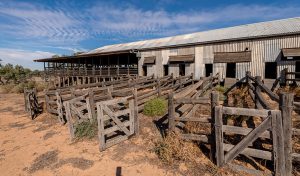 The large woolshed is still filled with remnants from these days, documenting the changes in shearing methods over the years, from blade shearing, to steam-driven mechanical shearing, and finally electric shearing.  Wool presses, machinery, tables and the steam engine that was used during its 97 years of operation remain. During Kinchega’s nearly 100 years of operation, over 6 million sheep were shorn at the woolshed, and in 1967 when the property was resumed by the NSW Government, Herbert’s son Harold celebrated the 6 millionth sheep being shorn. The holding is now a national park. 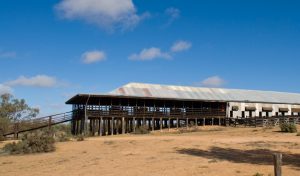 One final chapter remains in the property’s history. It was here that the infamous Burke and Will’s expedition picked up William Wright, who was later blamed for the failure of their 1860-61 trek across Australia. Wright failed to bring supplies to Burke and Wills from Minindee in time, and for many, this was seen as the reason why both the explorers died. I have no doubt that the Paakantji Aboriginal people and the tribes further inland who’d existed for eons in this environment probably couldn’t believe the stupidity of these men.