The original Ghan railway, camels, copper, Afghans, sheep and a starting point for major expeditions. Every year thousands of tourists flock to the iconic Flinders Ranges in South Australia attracted to the rugged mountains and dramatic landscape. But beyond the ranges, rests one of Australia’s most notable rural stations, a historic property that occupies a special place in Australia’s past. 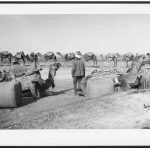 Beltana Station is just off the Outback Highway in South Australia, and dates back to the 1850s. The Beltana area used to be a resting place for local Aboriginals, a place to find food and water, and thus, the name Beltana was derived from the Adnyamathanha Aboriginal peoples’ word for ‘running water’.

It’s said that Beltana Station was first surveyed in 1855, and then in 1862 the Station was taken over by Sir Thomas Elder, who acquired it from his brother-in-law Robert Barr, along with 17,705 head of sheep. Over time the property grew and diversified. One of the most interesting facts is that it served as a starting point for many expeditions, including the famous east to west expedition by Ernest Giles, who travelled to Perth across the Great Victoria Desert.

In its day the property was also a successful camel breeding stud, which began when Sir Thomas Elder imported some of the first camels to South Australia. These ‘ships of the desert’ were exported from Beltana to locations all over Australia, even to Arabia. Afghans were employed at the station to care for the camels, which at the time were the main mode of transport to carry goods for the overland telegraph line, the 3200km telegraph line that stretched from Darwin to Port Augusta. 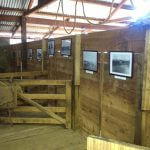 Beltana really came into its own from 1875 to the 1920s, with the rise of copper mining and the construction of the original Ghan Railway, known as the ‘Port Augusta to Government Gums Railway’, which followed the same track as the Overland Telegraph Line.

Beltana station played an important role in the town of Beltana, employing a large number of the community in various positions including blacksmith, saddler, cook, shearer, cameleer, bookkeeper, fencer and boundary rider. It was such a large station that other stations used Beltana woolshed to shear their sheep.

Over the years Beltana Station was used as a set for a number of movies such as Gallipoli, Thousand Skies and Rabbit Proof Fence, and it’s still a working sheep and cattle farm today, (along with Puttapa Station) stretching over an area of 1,876 square km, with livestock adding up to more than 8,500. 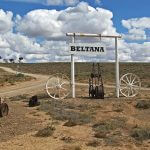 You can visit this iconic station in person, as the owners have transformed it into a 4wd destination, where visitors can stay onsite and experience everything this property and the stunning Flinders Ranges area has to offer.