On the squatters run – Challicum Woolshed

At a time when the Australian wool export industry was firing on all cylinders, many of our colonial ancestors drifted across country Victoria in search of fertile pastoral land to run their sheep. Squatters and pastoralists were cashing in on the flourishing wool business, exporting their product to England, and becoming very wealthy along the way.

From the mid 1820s it was common for squatters to take up quarters on unoccupied crown land without any legal title, and use the land to run their sheep and grow their business. Many of these properties formed what was known as ‘squatters runs’. 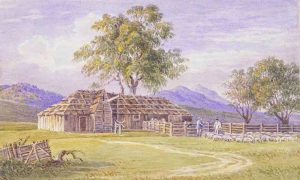 One woolshed in particular, the Challicum Woolshed, was built by Duncan Cooper, an illegal squatter, just northwest of Geelong, close to Fiery Creek in Victoria. Duncan Cooper lived on the property for 12 years, at first residing in a tent, then a humble hut, then eventually building a woolshed and homestead.

Because squatters never really owned the land, Challicum Woolshed was built quickly and cheaply, using only local materials like bark and timber, avoiding the expenses of quality resources and cartage. The construction was extremely basic, and very poorly built, so the sheep yards were easily broken if unskilled workers roughly handled them, or they were knocked about by the sheep.

Using local materials for the construction had a particularly destructive impact on the surrounding environment, and it’s said that 500 trees would have been destroyed to build a woolshed like Challicum. Due to its cheap build, parts of the structure would only have a lifespan of around 2 years. A kind of unsustainability that is unthinkable today.

As far as Challicum wool was concerned, it was highly sought after as some of the finest wool in English warehouses once it was shipped abroad. In 1845 there were 10 men working the property and it was stocked with 5000 sheep and 10 head of cattle.

Due to its occupation by squatters, there is little official information available regarding the Challicum Woolshed, but if Duncan Cooper’s paintings are anything to go by, what we can see is that the families of the squatters who lived at Challicum existed harmoniously with the local Aboriginals, who dwelled in huts very close by. With a great many men ensconced on the gold fields at that time hoping to make their fortunes, it was the local indigenous inhabitants that formed much of the work force.

Today, a modified version of the woolshed still stands, and while its history is a little vague in parts and no official records were kept, its memory has been documented through the beautiful collection of drawings and paintings by Duncan Cooper himself.