Sunrise and sunset. These are my favourite times of the day, when the sun is near the horizon straddling the rim of the earth, as it either embarks on bringing us a new day or dwindles towards nightfall. The best photos are taken at this time when sunlight travels through a greater depth of atmosphere, reducing the intensity of the direct light that can be so harsh in Australia. In photography and cinematography, the period just before or after sunrise and sunset is known as the golden or magic hour. A time when daylight is softer and redder than when the sun is higher in the sky. 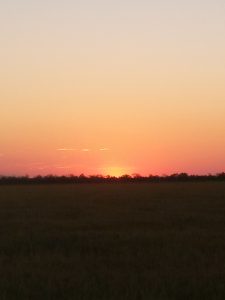 Morning and night, dawn and twilight, a time of shadows, beginnings and endings, days planned and hours spent. We forget how our lives are bridged by the movement of the planets, illuminated by light and dark and yet years ago many people relied on the movements of the sun and the moon and used almanacs to obtain this information.

These rather weighty books were annual publications that included vital information such as weather forecasts, farmers’ planting dates for crops, dates for the growing of vegetables and fruits and other statistical information often arranged according to the year’s calendar. Such facts were crucial for newcomers to Australia and those who established properties further inland. Many holdings were terribly isolated and the growing of foodstuffs was imperative for survival.

The almanac was also a social diary of sorts offering up a range of material that was of use to everyone no-matter where you lived. Church festivals, public holidays and town agricultural shows, railway services, the Cobb & Co line, coastal tide dates and the shipping news; this was the bible that many turned to in Australia and other parts of the world whether for example you were a farmer, fisherman, housewife, importer or retailer. 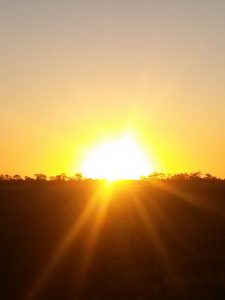 Astronomical data and various statistics were also found in almanacs, such as the times of the rising and setting of the sun and moon and eclipses. In the bush many social occasions were arranged around the full moon, and travellers tried to make use of the guiding light as well. So the almanac was a crucial component of daily life for some. It was far easier to travel by horse, buggie or dray when the moon was high and to hold a party when electricity was yet to be invented. And weather forecasting? A full moon can often signal a weather change and those rising and setting suns? ‘Red sky in the morning shepherd take warning; red sky at night, shepherd’s delight’.