Is this agriculture’s golden time?

Is this the golden era for Australian agriculture? That depends on where your business is located, what you produce and taking a short-term view, how well your commodities withstood this summer’s hot temperatures. Of course farming is a long-term game with history pointing to more downward fluctuations than up. However there are standout periods. Some of them include: The 1950s. An era of buoyant prices for the wool industry thanks to the Korean War and prices for grains were also good during the decade. Going further back in time, both the First and Second World Wars led to increased demand for wool for uniforms and sheep-meat, while the Great War saw a surge in cattle prices due to the need for bully beef.

Currently overseas markets are showing high interest in the backbone commodities of beef, wool, lamb and cotton however nuts, such as almonds and macadamias are also in demand. 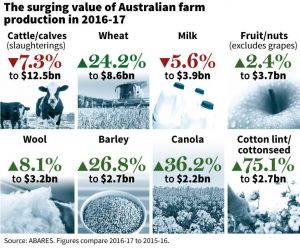 ABARE (Australian Bureau of Agricultural and Resource Economics and Sciences) is forecasting a big rise in the value of Australian farm production, with an 8.3 per cent increase resulting in $63.8 billion. If you think the producers are hopeful of such a result you can imagine how encouraged the contractors, farm-hands, stockmen, chemical and fuel companies, grain depots, transport companies, processors etc and regional, rural and remote areas in general are feeling.

And don’t forget the state and federal governments. Everyone loves a winner especially when it increases a nation’s GDP and allows a rush of funds into the Australian Taxation Office’s coffers. We can thank the agricultural industry for its part in ensuring that we didn’t slip into a recession last quarter. 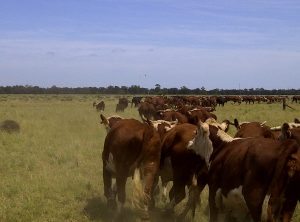 The big rise is due to better seasonal conditions in most farming areas and strong prices, particularly for our major exports such as beef, lamb and wool. Behind these stalwarts is the increasing success of tree nuts. Their value is estimated to hit $760 million in 2016-17, the second highest on record. So who’s buying our tasty nuts? India and Spain love our almonds. While China can’t get enough of our macadamias.

“The exceptional value of farm production this year comes off the back of record crop production and strong performance across livestock industries,” ABARES executive director Peter Gooday said.

So it looks to be a fine time to be in agriculture, if you’ve had rain, no bushfires and no severe storms. And in the future? Next financial year, ABARE’s predicting strong export earnings growth for cotton, dairy and wool.